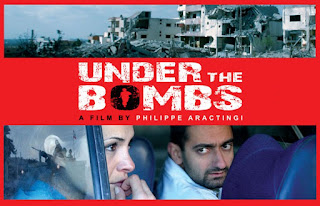 Last night I watched the movie Under the Bombs Directed by Philippe Aractingi. This movie pays tribute to those Lebanese victims who suffered in the 2006 Lebanon-Israel conflict. Victims of war are too often ignored by the media, especially the American media when the victims are our enemies or are enemies of our allies. In 2006 the United States showed unwavering support for the Israeli government in their decision to attack South Lebanon. Under the Bombs reminds us of the humanity even of our enemies. It reminds us that it's not only soldiers who die in conflict, but it's mothers, fathers, and children.

Somehow, when it comes down to it, when life is at stake and we remember the faces of people; politics, religion, and the concerns of governments fade away and all that matters is whether or not we can come out the other side still capable of love.

"It's not my war. It's not yours, my sister. Do we have a right to live? Is that too much to ask? Forgive me for not being with you." _Zeina (Nada Abou Farhat)

See this movie. it's incredibly moving and powerful. It will offer some perspective as we seek to think critically about conflict surrounding Israel and conflict around the world.

I apologize for being off subject here, and for not reading or commenting in a long time. But I wanted to alert you that I have resuscitated the old blog.

This is the blogger formerly known as Messianic Gentile.

Thanks Kit. I'll check it out.