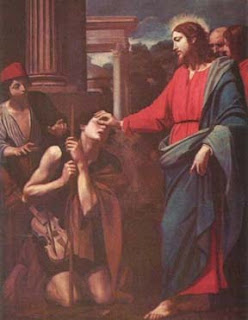 "As he went along, he saw a man blind from birth. His disciples asked him, 'Rabbi, who sinned, this man or his parents, that he was born blind?'
'Neither this man nor his parents sinned,' said Jesus, 'but this happened so that the work of God might be displayed in his life. '" _John 9:1-3

But the Scripture declares that the whole world is a prisoner of sin, so that what was promised, being given through faith in Jesus Christ, might be given to those who believe._Galatians 3:22

I believe the paradigm of sin needs to be re-examined. We have come to the conclusion that people must primarily be understood as perpetrators of sin. Sin has become the identity of people and we have understood salvation ultimately as pardon for the sin we ourselves have committed. Thus, salvation is for the individual and my concern is only my sin. But, though it is obvious that throughout the Scriptures sin is usually referenced as something committed by groups and individuals, it is never an assumed identity for human beings. Sin makes it's way into human identity through by way of oppression. Sin often happens in the heart but it ultimately an exterior invader... it's something that does not belong. The presupposition in the Old Testament texts is that sin itself is what makes people victims, it's what causes people to suffer. The focus, on the whole, is upon the victim... "I have sinned against God and so and so"... the focus is upon the affected party, the one for whom sin has caused suffering of unpleasant circumstances. The identity of the human being is not "sinner" but victim. And one who sins is still a victim but is a victim who perpetuates victimization... the victim becomes the victimizer and thus sins against other victims. Sin is part of our identity insofar as we have a history of being oppressed by it. It is not that we are to be identified as sinners.

But our presupposition has changed quite a bit since the Old Testament. We have understood ourselves as sinners at the core. We have understood individuals as being ones who commit sins and are indifferent to whether or not they themselves are made victim by it. We think of salvation in terms of pardon rather than liberation. Salvation has become everything about forgiveness and nothing at all about freedom from the oppression caused by sin's presence in the world. Our focus is on the one who sins and not so much on the one who has been sinned against.

I think it's time we returned to an old idea. If we think of people as victims of sin then it will play out as a much more practical perspective for those who follow Jesus. It will make sense of language like "freedom from sin" and will free us up to see the work of Jesus as something for all people. We can actually see hope for all, that all can be free from the suffering of sin and no one has to continue to revert to the status of sinner. We will see, as Jesus did, that my personal sin is not my only issue but my concern for the oppressed is even greater. We will be free to presuppose that people are created in God's image.

Sin in an unwelcome invader. It has pushed itself upon God's world and has confused us. It has offered us an identity which is continuously affirmed as more and more sin enslaves our world and kills our children. God has offered an alternative identity, "this is my Son in whom I am well pleased." And Christ offers that alternative to us as he defeats the power of sin on the cross and through resurrection. The church has the opportunity not only to accept this alternative and to live in justice and righteousness, but we have the opportunity to offer this alternative to the world and let them know that they do not have to be what sin has told them they are. We don't have to be what the world wants us to be. We don't have to submit to the powers of death. The victim can stop the patterns of this world by refusing to the the victimizer.
Posted by wellis68 at 8/05/2009 02:05:00 PM