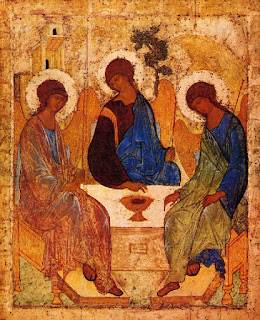 "We don't accomplish anything in this world alone ... and whatever happens is the result of the whole tapestry of one's life and all the weavings of individual threads from one to another that creates something." _Sandra Day O'Connor

"Keep in mind that our community is not composed of those who are already saints, but of those who are trying to become saints. Therefore let us be extremely patient with each other's faults and failures." _Mother Teresa

"The eye cannot say to the hand, 'I don't need you!' And the head cannot say to the feet, 'I don't need you!' On the contrary, those parts of the body that seem to be weaker are indispensable, and the parts that we think are less honorable we treat with special honor. And the parts that are unpresentable are treated with special modesty, while our presentable parts need no special treatment. But God has combined the members of the body and has given greater honor to the parts that lacked it, so that there should be no division in the body, but that its parts should have equal concern for each other. If one part suffers, every part suffers with it; if one part is honored, every part rejoices with it." _1 Corinthians 12:21-26

We Christians need to be a bit more ok with messiness, especially as we seek to form community and work together in love and charity. I think many barriers are erected when we need everything to be quite tidy and for everyone to be in agreement. We each write our own "faith statements" and use them as a method for picking and choosing who we do community with and who we are willing to work with. We must see that there is a problem when we see so many different Christian communities bickering back and forth and doing their own thing in isolation from one another. We should be working together... this sort of language has become cliche but it is true. The church is the foretaste of the kingdom of God and as such we are giving the world a taste of a very bitter kingdom with all sorts of divisions, arguing, apparent apathy, and dissension. The problem has two parts... the first part has to do with placing at the center what should be at the fringes and the second part has to do with our starting point.

What we too often do as we articulate our faith is we take theologies and ideologies which should be incidental to whether or not we can work together and we place them at the center, in a prominent place of importance. As we do this we make unnecessary distinction between people, placing some on the outside of orthodoxy who should be on the inside thus creating an atmosphere of competition rather than partnership. An example of this can be seen in the cultural debate about women in ministry. Whether or not a woman should be ordained in the church should be, in my estimation, peripheral to the unity of the church. This is tough because it's so personal but at the same time it's more important for the mission of the church for us to respond to hunger and oppression with the hope of the Eucharistic Kingdom of God. Both "liberals" and "conservatives" are guilty of placing women in ministry at the center when it should be on the fringe. It should be one of those conversations we argue over as we carry food to the hungry together rather than one that divides us and paralyzes us from partnership. churches who ordain women are often unwilling to unite with churches who do not and vice versa. We should place our mission at the center rather than our theologies wherever we can (though there are times when it's impossible to do so due to the theological nature of the mission). We should unite under the banner of sacrament--being the effection of God's grace into the world through love and action--rather than the banner of dogma and petty difference. Christ and his cross should unite us under the same "our father" rather than divide us under theories of atonement and stances on homosexuality. We rediscover the center of our faith and keep it there and allow the fringes to remain negotiable as we move and work together as very different people in one very diverse community. We have to be ok with how messy this process with be.

We also must consider our starting point. Do we, for instance, begin with the question, "how can we work together?" or do we start with "what are our differences?" Is our starting point in partnership or in distance? You see, one option would be to start out presupposing a separation. This starting point would make it almost certainly impossible to find unity and community. Our differences are already difficult to deal with as it is, if we are separate from the start those differences will keep us separated. It will be painless because we'll have no real investment in the communities with which we've separated. But the other option is to start off with the foolishly optimistic presupposition of unity. What if we, even though all logic says we're different, start of assuming that we're the same, that we can indeed partner with each other? What if we start off together in this mission and deal with our differences as they come up, constantly asking "what can we partner in? with the full understanding that we may not be able to do everything together. We may in the end find this option to be more painful because differences may eventually divide and leave wounds. We may discover that our differences are difficult to deal with and that community hurts when you don't get to pick and choose it. But will show the world a kingdom of God that is united in its response to suffering and in it's proclamation of the gospel even in diversity. We will deal with our disagreements, reason with one another, and even argue with each other as we work to partner with God in His work of redemption.

Community, in the end, is tough, it's painful sometimes, it's messy and if we do it well, working through our differences while we work together, community is what will heal the world. But we need to be ok with messy.
Posted by wellis68 at 8/04/2009 12:58:00 PM