No Nation, Just the Kingdom 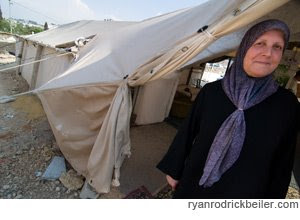 If your enemies are hungry, give them bread to eat;
and if they are thirsty, give them water to drink
- Proverbs 25:21

What country lives out this proverb? What nation even comes close? Perhaps Israel, the nation which has legitimate claim to the tradition from which this call echoes? Perhaps the United States which often claims itself to be a "Christian Nation" and Israel's greatest supporter? No. Tragically, no nation has fulfilled the call of God. No nation can without denying itself and seeking not it's own interests but seeking first the Kingdom of God. No nation with armies which kill enemies, borders which keep them out, and policies which displace and keep them in poverty will ever be God's kingdom. No nation which strives off of the power of death and all the things which just "make sense" for nations will never be the foretaste of God's redemption. No. No nation, just the kingdom

Today I read this article by Ryan Rodrick Beiler of Sojourners.

"[Fawzieh al-Kurd] has lived in a tent within sight of her home in the Sheikh Jarrah neighborhood of East Jerusalem since 2001 when Israeli settlers took over her home with the help of Israeli police. Her husband died of a heart attack two weeks later. She’s been encamped here since on a patch of ground owned by a Palestinian who has given her permission to stay there–within sight of the home built by Jordan and the UN in 1956 for her and other refugees forced from their original homes when the state of Israel was established in 1948."

But recently it was discovered that where Fawzieh's tent had once been is now occupied by Israeli police vans. "Apparently they have demolished her tent once again–making this the seventh time they’ve done so." Jesus said, "love your enemies, do good to them, and lend to them without expecting to get anything back." This is quite different from what nations do to their enemies. This is quite different from what Israel is doing to the Palestinians. Yes, the kingdom of God is quite different. Followers of Christ are people who earnestly seek out, support, and welcome all who suffer including enemies of nations.

Lord,
Teach us, your followers, your people, the wisdom which the nations call foolishness. Teach us to be foolish enough to love the unlovable, to do good without expectation for our enemies, and to give life to the unwanted rather than take it from them. Teach us to see ourselves as one with the others. God, remove the police vans from our lots and give your people more than tents in vacant lots. Give us homes of warmth and joy.
Amen.


No longer will they build houses and others live in them,
or plant and others eat.
For as the days of a tree,
so will be the days of my people;
my chosen ones will long enjoy
the works of their hands. (Isaiah 65:22)

I will bring back my exiled people Israel;
they will rebuild the ruined cities and live in them.
They will plant vineyards and drink their wine;
they will make gardens and eat their fruit. (Amos 9:14)
Posted by wellis68 at 8/04/2009 05:23:00 PM