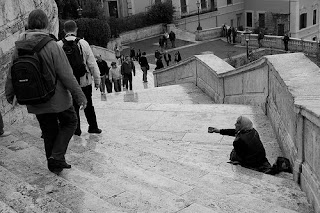 I have never been able to understand quite how the doctrine of hell (that is a post mortem experience called hell including suffering etc.) should fit in with my theology. I think I've narrowed it down to five options, that is until someone offers me a sixth.

What I believe about God in a Nutshell:
It's important that I let you know what my presuppositions are. I will generally if not always presuppose that God loves and passionately pursues each person individually as he has created them individually (though I believe in an undeniable corporate/covenant love as well). I believe that God's love is on its way to the suffering, the poor, the oppressed, and that following Christ, which is inherently intertwined with soteriology, in some way entails a sort of hermeneutic of poverty--heading where Christ's love is going and interpreting all our experience within the framework of solidarity with the oppressed--seeing the face of God in the poor and feeling God's passionate love for those who suffer. I will also presuppose that the core of the gospel is that God has not and will not give up on the world. I believe this corporately, first and foremost, but individually as well. Thus, God does not give up on anyone. His covenant faithfulness and his passionate pursuit of people, corporately and individually, is such that God will go to the greatest of lengths, even to ultimate suffering, to retrieve the lost and to heal and save the oppressed. I believe that He is the supreme example of solidarity with the poor, that his death was the greatest expression of that solidarity, and that his resurrection is the foretaste and the first fruits of the salvation and restoration of the world he created. The only practical way to follow Jesus is to live out that same pattern of life, of solidarity and vindication--identifying with, having compassion for, and passionately pursuing the salvation of the poor, oppressed, and crucified. I presuppose that when God says, "I am making everything new!" he really is making all things, without exclusion, new. Thus when we imagine the eschaton, when we picture the "final" state of the world, however limited we are, we must imagine a world where God can say, "everything is new, everything is restored, it is finished." We must imagine a world in its final state as God would have it be.

Hellish Options:
Therefore, with all of those presuppositions being as they are here's my options and my thoughts on them.
1. Believe in eternal suffering. And believe that God is at some level ok with it. Believe that in the end, some will suffer eternally and that God is satisfied with their suffering enough to still be able to see it and say "I have made everything new." Believe that God will either turn his eye to or be pleased with someone's pain. This option does not fit in with my theology, it doesn't make sense for me to believe this and still affirm a God who passionately pursues all he has created and desires their salvation. That God would not be satisfied with anyone's suffering and thus could not be satisfied in saying "I have made everything new." This brings me to the second option.

2. Believe in eternal suffering. And believe that God is eternally depressed. In the end, some will suffer eternally and God, in line with his passionate love, will suffer with them and will be eternally heart broken over their pain. This view makes more sense to me, in fact I have at times considered it as the best option but it still doesn't make sense to me eschatologically. God would, in the end, be unsatisfied with the world.

3. Believe in suffering but deny eternal suffering. Accept that some will experience hell, some will go to hell when they die (or enter into that experience), but God will rescue them. God will continue to pursue his beloved to the greatest lengths, even snatching them from hell itself. Thus, in the end, God will be satisfied for he will indeed have redeemed all people and all creation. He will be satisfied with the eschaton. This option is not totally comfortable for me because I am concerned that there may be some passages of scripture I am not really dealing with but so far it seems like the best option, taking into account everything I already presuppose about God.

4. Deny eternal suffering altogether. Believe that after death, people are resurrected by the grace of God to new creation without any experience of hell or suffering. Believe that all are saved and that hell does not exist postmortem. Believe in the total restoration of all things upon resurrection. I am not totally comfortable with this view because I'm not sure it takes hell seriously as it is mentioned in scripture.

5. Annihilationism. I debated giving this one it's own category because annihilation, loss of existence, really could be the same as eternal suffering... it's a state in which people were not created to live and thus God wouldn't be satisfied with it in my view. God wouldn't forget people even if they stopped existing. Therefore God would either have to be eternally depressed or he would have to be ok with some suffering... just like the first two options.

I figure that someone who believes in eternal suffering has to believe that God is either ok with some suffering or that God will remain eternally heartbroken about the suffering of the world even if it's only some people and I don't know how to live a theology like that without being ok with or ignoring some suffering too. I am not comfortable with any of the options as of right now so I welcome any suggestions. I believe that anyone who has experienced a glimpse of God's compassion for even a stranger must have a problem believing that God would be ok allowing one of his creation, someone who he loves with a passion beyond compare, to burn in hell forever.
Posted by wellis68 at 8/06/2009 05:09:00 PM

In the end, the gates of Hell shall not stand against the Church of the Lamb! :)

I do believe that hell is murky topic, scripturally, but I think you laid out the options well, you left moderate social libertarian, you.

I actually enjoy the stuff you added to your sidebar!

Andrew,
Like I said, #3 is the most enticing to me. Perhaps it's just my conservative/evangelical background keeping me from converting wholeheartedly.

Nate,
I'm glad you enjoy my sidebar. I was hoping someone thought it was as cool as I did. :)