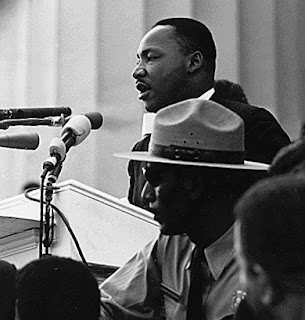 Perhaps the first part of having an eschatological imagination is to ask the question, "what kind of world do you want?" when faced with an ethical, social, political, or religious dilemma. Now, a specifically Christian eschatology will answer that question in terms of what Christ did and does in the world. The Christian answer should always be God's answer. We should imagine the world that God dreams of and then live accordingly, passionately pursuing that kind of world. It is eschatological imagination which can keep us from cynicism and which will make certain issues, which we might have thought were easy, very difficult. For example, questions pertaining to the American border laws, which might seem simple at first when all we're thinking about is economic efficiency and American independence, become difficult when we begin training and living according to a vision of a world without borders (unless you really believe that God's kingdom has borders). Without eschatological imagination, without dreaming, it's easy to become cynical in order to keep things simple and comfortable saying, "well, that's just the way it is..."

When we are faced with dilemmas we can judge them on the basis of imagination. Some solutions are imaginative and worth failing if only to have tried. Some simply lack imagination, giving up on any dream of the world as it should be and showing themselves to be compromising with cynicism. With eschatological imagination we have the freedom to reject all solutions which bow to compromise, which accept some suffering, and which fall short of God's kingdom.

Once you begin to dream with God of a world without borders, wars, discrimination, oppression, and all the other things which really don't belong here in the first place, you begin to hope with God for that same kind of world. Dreams may not be easy. It may be much easier to fall into cynicism and simply accept things as they are, giving up on any vision of the world as it should be. When we cease to dream of the world as it should be we forfeit our imagination to sin and death. A Christian is someone who dreams with God.