Waiting for a Different Kind of Messiah 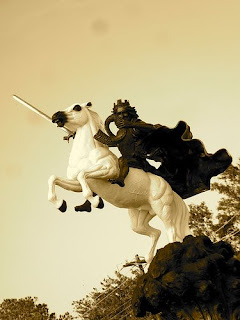 When Simeon saw Jesus, he embraced him and said:

“Sovereign Lord, now let your servant die in peace,
as you have promised.
I have seen your salvation,
which you have prepared for all people.
He is a light to reveal God to the nations,
and he is the glory of your people Israel!”
(Luke 2:25-35)

Simeon had waited his entire life to see God's salvation, "light to reveal God to the nations," and "glory... of all Israel." And in the moment he laid eyes upon this poor Jewish baby he knew he had finally seen it... though possibly not as most had expected.

Jesus was and is God's salvation... he's it... so if we should ask what it is, what it might actually look like, we need look no further than Jesus Christ. We don't need to wait anymore for the answer to the question, "what does God's salvation look like?" or "how will God save us?" We know what to expect because we've seen it in Jesus' life, teachings, death, and resurrection. Though the specifics can be frustratingly confusing, we know that however God will save the world it will be and has been in the mode of Christ.

Jesus came with and offered the world a new logic. He came with logic that said, "pray for those who persecute you." He showed up, not with promise of military conquest, not with the sword of destruction, and not with the same kind of vengeance his people wanted from him. He didn't achieve victory in the people's terms, by putting his enemies to death and overthrowing the ungodly oppressor, but did so by dying for his enemies and consequently resurrecting to life and putting death itself to shame. Jesus was not angry (at least not like they wanted him to be) and he was not vengeful (at least not like they expected him to be). His victory was swift but broadly unrecognizable to the hard-hearted and the religiously ideological. To those bent on military might and victory through violence, Jesus was just too confusing to comprehend and so, I'm sure, they settled back down into the comfort of their own traditions and ideological expectations. This is not unlike what many Christians still do today.

Christ showed us that true victory has a very different definition from that of the world, from that of any "Beast" or political power (even if that power claims to be a "Christian nation"). He showed us that salvation does not come through the acts of clawing and scratching and killing for self-preservation as so many war-songs seek to glorify. But Christ's sort of victory comes through love, compassion, sacrifice and servanthood all of which are virtues utterly incomprehensible to the world and its' powers. Jesus offers a much more compelling kind of salvation than that of the expectations of his contemporaries. And in his new logic, he has made it clear what God is really like. He himself has vocationally and in all other ways revealed God to us and thus he is THE answer to the question, "what is God like?". Jesus has vocationally and in all other ways revealed to us the abundant new life of salvation, the originally intended image-bearing life of human kind. Jesus' life is the life God has had in mind for his people since He created them in His own image--a life of love and harmony and compassion--a life now possible through His forgiveness and reconciliation enacted on the cross of Christ. This salvation is salvation from death and to life renewed. Unless the cross is just a nice image with no practical relevance, we must believe that death has been defeated and the abundant life Christ promised is available to us today.

But still we have missed the point. Though Christ showed us in his coming that God is not a God of hatred and militant conquest but of love and forgiveness, Christians today still expect Christ to be militant, violent, and vengeful in his second coming. They expect, through the comfortable lens of tradition and ideology, a return in which Christ will do all the things he apparently neglected to do in his first victory (if victory can even still be attributed to the first coming in their view). Though Christ offered us a new logic of salvation, still there are those of us operating under the old logic.

I'll never forget the statue outside of the TBN (Trinity Broadcasting Network) Studios building in Costa Mesa, California. It depicts Jesus riding a white horse, carrying a sword, with a look of triumphant anger. It misses all the irony of the description from Revelation which it attempts to depict (the description in Revelation is ironic because the author's whole image is one of subversion. For example the author subverts the whole idea of superiority and militarism by placing the ultimate martyr, a crucified Jew killed by Romans, on the back of a Roman white horse. And in the description, his enemies are killed by the sword of his mouth, the sword of word which created the world and creates the world anew, rather than the sword of destruction which threatens the world with death). In the statue, Jesus looks like you might imagine any other king or soldier riding into town but sadly looks nothing like the Jesus of the gospels who rides on a Donkey.

Even though Jesus showed us what he's really like, we still expect him to come down and win through military conquest and violent resistance. It's like we didn't really take him seriously the first time. It's as though the way he came before just wasn't good enough for us. We miss all the irony of Revelation, we settle into the comfort of the logic we know so well, the logic of the world, and we expect the same kind of Messiah the people expected before Jesus came.

Let us put our hope in Jesus, the Jesus who came in humility and grace. Let us not operate by old logic but embrace the imagination of the God revealed in Jesus Christ. We have seen God's salvation, we know what it looks like, let us not wait any longer for a different kind of Messiah.
Posted by wellis68 at 7/10/2009 03:22:00 PM

Wes, my friend, this is by far one of my favorite blogs, and this specific post I couldn't agree with more!

Well, thanks John! Such a big compliment is even greater coming from you.