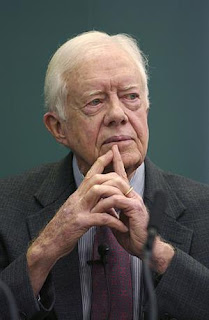 I read this interesting article yesterday and I found it to be quite pertinent to the "Women in Ministry" conversation as well as any feminist dialogues going on right now. Former President of the United States, Jimmy Carter, has apparently cut ties with his church, the Southern Baptist Church, "after church leaders prohibited women from being ordained and insisted women be 'subservient to their husbands.'" Carter said,


"At its most repugnant, the belief that women must be subjugated to the wishes of men excuses slavery, violence, forced prostitution, genital mutilation and national laws that omit rape as a crime. But it also costs many millions of girls and women control over their own bodies and lives, and continues to deny them fair access to education, health, employment and influence within their own communities."

Carter also accurately describes the decisions we have when we read the Bible:


"The carefully selected verses found in the Holy Scriptures to justify the superiority of men owe more to time and place - and the determination of male leaders to hold onto their influence - than eternal truths. Similar biblical excerpts could be found to support the approval of slavery and the timid acquiescence to oppressive rulers...The truth is that male religious leaders have had - and still have - an option to interpret holy teachings either to exalt or subjugate women. They have, for their own selfish ends, overwhelmingly chosen the latter."

Carter is right. The truth is that there is no shortage of sound Biblical and theological scholarship to help us see that the Biblical text at least need not be read from a chauvinist perspective (one good chapter is V.P. Furnish's "Women in the Church" in his book, The Moral teaching of Paul) but a great many church leaders have ignored them and a vast number of male and female Christians have remained uninformed of these perspectives. What can we do about this? How can we remain faithful to God's proclamation through Paul that "there is neither... male nor female, for you are all one in Christ Jesus"? Perhaps Jimmy Carter has showed us one option.

It's good to see that someone is standing up and making this a public thing. It is an issue that needs to be brought to the forefront.