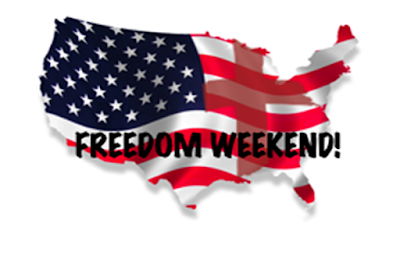 The fourth of July is a hard time for me. And to be totally honest, I don't like going to church on on that weekend. The words that get thrown around on Fourth of July weekend are words that amount to nothing less than propaganda. Words like "independence," "liberty," and "victory" are embraced by the church when they should be replaced or subverted. For people who follow Christ (rather than the Declaration of Independence) and take his teachings seriously, the word "Independence" should be replaced by "interdependence." "Liberty" along with true freedom should never be understood as something given to us by a government or founding document nor through the use of violence as in war or "revolutionary war" but only by and through Christ who gave himself for us. The "victory" claimed by American bombs and bullets in the Revolutionary War was not the victory of the church nor a victory to be claimed by the church, our only claim to victory is through resurrection not conquest. But even still, on fourth of July weekend, the church becomes a patriotic gathering where all of these words are used and understood in terms of American triumphalism rather than in the terms of the gospel of Christ.

Idolatry is when we value and fight for something we never needed to begin with. On Independence Day Americans celebrate idolatry, when American soldiers fought and died for something Christ has offered from the very start--freedom. The church continuously misses its' opportunity to point this out.

It all comes back to identity. Are you a Christian who happens to live in America or are you an American who happens to be a Christian? Because if you're a Christian first, you will understand that what America does and even has to do is not what Christ does or would do. You would understand that America's kingdom is not God's kingdom. But if you are an American first then you'll be limited to understanding God's mission in the world in America's terms and by America's restrictions, i.e. war, borders, capitol gain, and foreign relations. Your imagination which should be enraptured by Christ and his kingdom, will be held captive by the world and it's kingdoms.

Do not marry the Church and America to one another. There is no "Christian Nation" and no earthly kingdom which proclaims the gospel of Jesus. This weekend, don't confuse America's definitions for freedom, victory, liberty, and revolution for Christ's definitions.

Go ahead and celebrate this weekend. Enjoy your friends and your family. Humbly celebrate the comfort and wealth we too often take for granted in America. But don't get the gospel of Jesus confused with patriotism. Celebrate tomorrow as "Interdependence Day", a day to remember the love and the need we have for the people around us.
Posted by wellis68 at 7/03/2009 01:47:00 PM

Wes, it always warms the hearts of Christians outside the U.S. to hear an American Christian 'get it' like you do.

Ian,
Thank you. That means a lot coming from someone from outside the U.S.
-Wes

It was no coincidence that in my message yesterday about evangelism that I told about a conversation with a Russian friend in 1993, where he asked me, "What would you think if the Russian Orthodox Church sent missionaries to the USA?"

I answered him, "If you can afford them, bring them on, because we need them."

That was very helpful to my friend, because it was then that he realized that I wasn't trying to spread American culture; I only wanted to share Jesus.

... oh, and in my church, I recognized Independence Day: the irony that we are celebrating independence from the nation who is now one of our closest allies. But also I recognized that as Christians, we are called to celebrate dependence and interdependence.

Thief,
Great stuff. That's awesome that you talked about dependence and interdependence at church. Very encouraging!