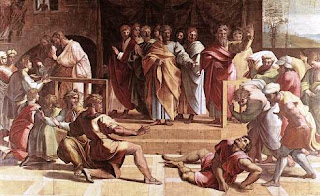 Yesterday at a youth event, the speaker asked the kids why David didn't throw the spear back at Saul when it was thrown at him (1 Samuel 18:10-11). I forgot what his answer really was, which is really bad, and I also forgot what his point really was, which is worse. But what I do remember is that when he asked the question, one kid in the group spoke up and said, "because God doesn't approve of violence." I was proud of the kid, I though that was a good opportunity for the leader to say something to affirm what the kid said, to point out the truth in his answer and that it was a good one even if that gets complicated sometimes. He could have said something like, "yeah, good answer, even though that gets complicated sometimes" just so the kid doesn't feel lied to when he someday discovers that there are some very challenging passages of Scripture (like where God tells the Israelites to kill everyone in Jericho). But instead of affirming non-violence at all, when the student said, "...God doesn't approve of violence" the speaker simply responded, "uh, actually I have proof that he does," laughed, and then went on to say that God killed Ananias and Sapphira "and that's in the New Testament." That hushed the student in his chair.

Troubled by the whole thing, I went on to read Ananias and Sapphira's story again:

Now a man named Ananias, together with his wife Sapphira, also sold a piece of property. With his wife's full knowledge he kept back part of the money for himself, but brought the rest and put it at the apostles' feet.
Then Peter said, "Ananias, how is it that Satan has so filled your heart that you have lied to the Holy Spirit and have kept for yourself some of the money you received for the land? Didn't it belong to you before it was sold? And after it was sold, wasn't the money at your disposal? What made you think of doing such a thing? You have not lied to people but to God."
When Ananias heard this, he fell down and died. And great fear seized all who heard what had happened. Then the young men came forward, wrapped up his body, and carried him out and buried him.
About three hours later his wife came in, not knowing what had happened. Peter asked her, "Tell me, is this the price you and Ananias got for the land?"
"Yes," she said, "that is the price."
Peter said to her, "How could you agree to test the Spirit of the Lord? Look! The feet of the men who buried your husband are at the door, and they will carry you out also."
At that moment she fell down at his feet and died. Then the young men came in and, finding her dead, carried her out and buried her beside her husband.
Acts 5:1-10

Notice something about this story? Nowhere in it does it say that God killed Ananias and his wife Sapphira. That is left somewhat of a mystery, but not too difficult a mystery. I would say that their dishonesty, they selfishness, and their indifference is what killed them and God knows we can learn a lot from that kind of a story. We can learn much more from that than we can from a story about God killing people who disobey him.

I find it interesting that the only story that I, and apparently that the leader yesterday, could think of from the New Testament which might promote violence, does not do so. I am stumped to come up with an example of a New Testament story promoting violence. So maybe the kid got it right after all. Maybe God does not approve of violence in a world where death has been defeated by Christ's resurrection. That's the world the church lives in.
Posted by wellis68 at 7/07/2009 06:28:00 PM

Yes. :) That, and I think God killing people is very different than people killing people. Let's say God DID kill those people--that doesn't mean he approves or promotes violence. Right?

I agree with you Sarah. That's another element I chose not to address but I think you're right. God doing something is not necessarily God telling us to go out and do the same. But at the same time it would still be problematic if God made ethical decisions that would be wrong for us to make. Problematic as it may be, I still don't see how it would serve as "proof" that God approves of violence.