The Wrong Place for Dogs 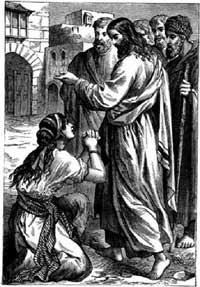 The other day I was at a church event with two other church youth groups (we try to do stuff together here in Ramona). We were having a blast, just goofing around. If you've worked in youth ministry you know these times, they're some of the best parts of working with kids--just getting to hang out with them and tease each other. During all the fun one of the leaders started heckling some of the kids by calling them "fags." I knew it was all in fun and deep down it bothered me, given where we were, so I just joked along and said, "that's not too culturally sensitive. How do you know I'm not gay?" And without skipping a beat he said, "well you're in the wrong place." I laughed but was truly hurt by that... not because I'm gay (and I'm not) but because I knew there was some truth to what the leader was saying.

I was reminded of a passage I recently taught on in our youth group, the story of Jesus and the Syrophoenician Woman. If you don't know the story, Jesus is hanging out with his disciples and a Syrophoenician Woman--someone that had no business coming to Jesus for help, he was the Jews messiah--comes to Jesus begging for help. Jesus calls her something quite derogatory saying, "it is not right to take the children's bread and toss it to their dogs." Now what was Jesus doing here? I am sure, at least I hope, that the disciples were surprised to hear Jesus talk this way. I am defiantly surprised to hear Jesus talk this way. But perhaps Jesus was talking to his disciples more so than he was to the woman. Think about it, the disciples looked at this woman and probably thought "dog." They had no problem thinking this way. But then I can almost see Jesus turning to his disciples as he says, "it is not right to take the children's bread and toss it to their dogs." It's one thing for the disciples to think it, but another thing for Jesus to say it. Jesus says this just to expose it for how ridiculous it really is. Here is a woman who desperately needs help, who is begging for just the crumbs from Jesus' table, and Jesus calls her a dog. This is not the kingdom Jesus has been proclaiming. There's a level of sarcasm in Jesus words, as though to say, "yeah, she's just a dog, huh? NO, that's ridiculous!" Jesus' final response is to do exactly what the woman asked. The disciples must have felt some conviction, hearing Jesus say what was in their hearts and seeing him expose it for what it was.

What does this story have to do with what was said a couple of days ago? Well, when the leader said, "well you're in the wrong place" part of me would have loved for Jesus to show up and just say, "yeah, church... totally the wrong place for gay people" just so we could all see how ridiculous it is to say that.

The problem is that the church has basically said this--"well you're in the wrong place"--in its' heart and needs Jesus to expose it because it's coming out in their actions. Whatever lip-service we give to being welcoming communities, we have yet to see the folly in our hearts, the plank in our eyes. The truth is we really believe that church is not the place for gay people, for Mexicans, for pregnant teens, for abortion doctors, whoever it may be for you and your church... we don't think they're in the "right place" if they find themselves in our communities. We should hear Jesus' words ringing in our ears, "it is not right to take the children's bread and toss it to their dogs"--"yeah, they're in the wrong place"--challenging the words of our hearts and calling us to bust our doors open to those in need, to anyone begging for crumbs.
Posted by wellis68 at 6/11/2009 12:12:00 PM

That is a great connection Wes! I think it is so true that we keep these attitudes and yet it offends us if one of our leaders displays it. Hopefully we are aware enough to catch our hypocrisy.

So many times I've been upset with either legalism or the belief that anything is okay.
I want the Church to be refined to maturity - but that won't happen when a large majority of the Church refuses to be free in Christ (free from sin or free from legalism).
It's one thing to be trying to improve. But if one believes they have the answers and looks down on others, like you're saying Wes, then they have pride, and they might not see their own sin.

There is a tension:

1. On the one hand, we need the Church, and the Church needs to open to the outcasts of society.

2. On the other hand, what should be done if the person becomes a regular where they become a stumbling block to other believers? Should they be excommunicated (it means a temporary sending away, not permanent) so the Body of Christ can bear good fruit?

Another question I have: where is the Kingdom of God?

If you have any more thoughts on this, I want to hear it.

Nate,
I want to say that I think you’ve captured the tension that is and should be part of our ethical decision making process. How do we be a welcoming community while at the same time making it clear, in no uncertain terms, who we are as the body of Christ?

I want to address what you said about excommunication. Excommunication would have been something I would have denied had you asked me a year ago, but after reading Torture and Eucharist by William Cavanaugh, I see how it is important that the church make clear distinctions. As such, we must be fully respectful of the power of such an action (excommunication), and I would say that evangelical churches could do better to think through and find language for excommunication.

Having said that, I think there is plenty of subjectivity to the whole thing. Context is important and each community must find their own language and process for hashing these issues out. But, in all of that, we must always keep the tension so as not to drift to any extreme. I am still quite hesitant of the idea of excommunicating individuals… I am thinking through what that would look like. But I am sure that the church can find ways of excommunicating on the systemic level.

The first step to living in this tension is living in community. Right now, I don’t think the church in America lives in community enough to even notice when something is tearing their community apart—being a “stumbling block”—and dismembering the body of Christ. We’d do well to re-member the body so that we can notice when it’s being dismembered. Until then we need to do the good work of entering into community with the outcasts and all the “wrong” kinds of people—those who really need saving. When we do this we take the same risk Jesus did but with the assurance of His resurrection.