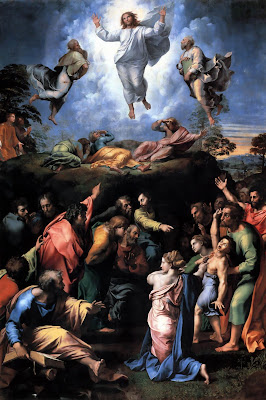 After six days Jesus took Peter, James and John with him and led them up a high mountain, where they were all alone. There he was transfigured before them. His clothes became dazzling white, whiter than anyone in the world could bleach them.And there appeared before them Elijah and Moses, who were talking with Jesus.
Peter said to Jesus, "Rabbi, it is good for us to be here. Let us put up three shelters—one for you, one for Moses and one for Elijah." (He did not know what to say, they were so frightened.)
Then a cloud appeared and enveloped them, and a voice came from the cloud: "This is my Son, whom I love. Listen to him!"
Suddenly, when they looked around, they no longer saw anyone with them except Jesus.
As they were coming down the mountain, Jesus gave them orders not to tell anyone what they had seen until the Son of Man had risen from the dead. They kept the matter to themselves, discussing what "rising from the dead" meant.
And they asked him, "Why do the teachers of the law say that Elijah must come first?"
Jesus replied, "To be sure, Elijah does come first, and restores all things. Why then is it written that the Son of Man must suffer much and be rejected? But I tell you, Elijah has come, and they have done to him everything they wished, just as it is written about him."

The transfiguration of Jesus is just a weird story isn't it? We've got Jesus going up on a mountain top (a significant place for Biblical events, i.e. Sinai for Moses, Carmel for Elijah, etc.) with his three closest friends on what turns out to be a seventh day--"after six" (a significant number for Biblical events, i.e. the Creation, the Sabbath, Joshua's conquest of Jericho, etc.). It seems that the author is doing everything they can to clue us in that something big is going to happen. And then Jesus is transfigured which is a fancy way of saying his appearance changed. He starts glowing--shiny and white--and talking with Elijah and Moses. Now why these guys? And what in the world are they talking about? There are several interesting things about Elijah and Moses. To mention at least a couple, first of all Elijah and Moses both had significant "mountain-top experiences" in which they saw God "pass by" in some way. Moses saw God's backside as God "passed by" and his face glowed as he climbed down the mountain to give God's people the Torah (Exodus 33:12-23). Elijah was told to go to a mountain to see God "pass by"--which eventually meant silence--so that he could be prepared to hear God and eventually anoint his predecessor Elisha (1 Kings 19). And they both represent something foundational for God's people--Torah and Nevi'im (Law and prophets, two major sections of the Tannakh; the Hebrew Scriptures).

Put yourself in the disciples shoes (and try to forget that your feet hurt from hiking this mountain). You're Jewish. Your whole self identity is built on your having been liberated by Moses from Egypt (even if you didn't actually experience it) and your whole understanding about how to be the people of God is built upon the Torah which God passed down to Moses. And your whole understanding of how to live out the Torah in specific situations, especially while under foreign reign/oppression like that of Rome, comes through the Prophets of which Elijah is among the first. Moses (the Torah) and Elijah (the prophets) are your whole life. And Jesus is your Rabbi--the one you've been following in order to understand as he does how to obey the Torah and the prophets. And here on this mountain, they're talking together and glowing--it's as though God has "passed by" in them. Huge!

But Peter doesn't seem to remember what the "mountain-top experience" are really all about. Peter's best response to seeing God's glory shining through Jesus, Moses, and Elijah is "let's set up camp." He says, "it's good for us to be here." To Peter, even though he's frightened, this moment just feels right--"it is good for us to be here"--and he doesn't want it to end.

I'm sure many can relate. Have you ever had one of those experiences where things felt right? Have you ever had a moment with God that you just didn't want to end? Have you ever thought to yourself, maybe in a moment of sincere worship, "it's good for us to be here"? Sometimes as Christians we live for those moments, the moments when everything seems to come together and everything is right. We live for them in our worship--when God feels close--and we live for them in our ministry--when lives are obviously being changed. We live for the moments when Jesus seems to be glowing. But that's not what those moments are about... they're not what we're supposed to live for. The call of the Christian life is for the moments when Jesus just isn't glowing anymore, when we have to come off the mountain, and when life gets real again.

About the moment when Peter says, "let's set up camp," a cloud envelops them all, a voice which can only be God's voice calls out, "This is my Son, whom I love. Listen to him!" and Moses and Elijah are gone. "Listen..." the voice says. Now this word listen is interesting especially in light of just how "Jewish" this story has been thus far. "Listen" in Hebrew is the word "sh'ma" which can also be translated as "hear" or even "obey." The Hebrew language does not have a distinction between "listen" and "obey" because they're interdependent. To truly hear, to listen, is to obey because your body is part of you--you listen with your ears and with your hands. To understand is to do. Therefore when God's voice calls out, "listen" God's also saying, "do!" And is thus revealing what the mountain-top experience is really all about. It's not just for the moment, it's not about spiritual euphoria, it's not about staying on the mountain, it's about being on a mission--the mission of Christ. The mission is not on the mountain while Jesus is glowing. The mission is where God feels far away, where the curse is not defeated yet. the mission is down the mountain where the people are.

And just what is this mission? Well Peter, James and John don't seem to understand that either.

After what the disciples just saw they might be tempted more than ever to think that Jesus is going to bring them wealth, prosperity, and victory over Rome. We might also be tempted, after those profound spiritual experiences, to think that there's nothing but good times ahead. We, like the disciples, might forget that the mission is tough sometimes and might even mean taking up the cross. But Jesus reminds them, coming down the mountain, that the mission involves struggle and sacrifice. Jesus says, yeah it's true, Elijah's come (maybe it's John the Baptist) and something big is coming but don't live in the spiritual euphoria, don't set up camp on the mountain-top when you're not there anymore.

Just as Moses went on the mountain-top for a mission--to give the Torah--and Just as Elijah went on the mountain-top to prepare for things ahead, disciples of Jesus go on the mountain-top in order to "listen" to Jesus so that we might obey and follow him on his mission of redemption. Spiritual euphoria is a nice place to visit but not a nice place to set up camp. Jesus reminds his disciples that they're following a crucified messiah--a reject. And we are reminded all too often that things don't always come together, life isn't always nice, God often seems far away if even existent, and Jesus doesn't always glow... sometimes he bleeds and sometimes we bleed. But God gives us glimpses of his Kingdom. God gives us moments of euphoria not in order to tease us but maybe to encourage us for the true mission which is among the poor, the suffering, the sick, and the crucified.

Church is not for church's sake, worship is not for worship's sake, and the mountain is not a place where we should stay. The Christian life, the life of disciples ship is where the people are, where death presides and new life can be offered. Jesus' love is headed down the mountain and it calls us to follow. Don't set camp on the mountain but move to the resurrection.
Posted by wellis68 at 6/29/2009 03:19:00 PM