A Thought for Maundy Thursday 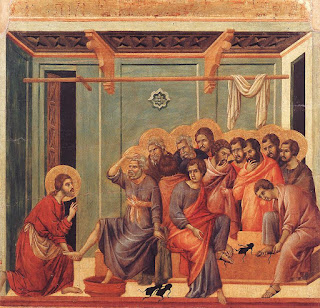 Tomorrow is Maundy Thursday. The word "Maundy," once you trace through its' middle English and french origins, comes all the way from the Latin word for "command" (mandatum) in reference to the command given by Jesus at the Last Supper: "A new command I give you: Love one another. As I have loved you, so you must love one another." Thus, the question we may want to focus on this Maundy Thursday is just what does such love look like?

This command is shown manifest throughout that sacred Thursday night's activities. Jesus had already shown them what such love looks like as he, their master, bent down to the status of a slave and washed their feet saying "you also should wash one another's feet." That same night he joined them in the first Eucharist, displaying love in offering his broken body and blood to them as their sustenance and celebration saying, "do this in remembrance of me."

The Disciples, in the lack of understanding, probed Jesus. Confused about where he was going and what was going on, they asked question after question. Jesus said to them "I will not leave you as orphans... the Holy Spirit, whom the Father will send in my name, will teach you all things and will remind you of everything I have said to you." He promises his Holy Spirit to them as empowerment and guidance so that they may follow this command and once again he offers it in a different dimension; "Peace I leave with you; my peace I give you. I do not give to you as the world gives. Do not let your hearts be troubled and do not be afraid." Jesus offers them peace but not the kind that Rome has promised, the kind which always turns up empty, but the sort of peace which draws us in and invites us into it. It's not the kind of peace which raises the sword against its foe, which really only brings chaos, it's the kind of peace which raises love; "My command is this: Love each other as I have loved you. Greater love has no one than this, that he lay down his life for his friends. You are my friends if you do what I command." The peace of Christ is the kind of peace which turns grief into joy, not malice. "I have told you these things, so that in me you may have peace. In this world you will have trouble. But take heart! I have overcome the world." Jesus command of love is a command of peace.

This same night, on the Mount of Olives, across the Kiddron Valley from Jerusalem, Jesus was betrayed and approached by soldiers with swords. Quite and ironic scene, I am sure; the prince of peace arrested by soldiers. And in even greater irony, Peter, one of Jesus' disciples, draws his own sword. Striking off the ear of a priest's servant, Peter shows that he has missed the point. Already Peter has failed in Christ's new commandment... he has already failed to live out the sort of peace that Jesus is leaving in his hands. At this, Jesus offers his final words of the night to the disciples, "put down your sword!" And he continues to display his command of love by healing the ear that once was severed.

Christ didn't say to remember him... he said "do" in remembrance of him. So, as you take the bread and drink the wine, don't only remember what Christ has done for you but leave that meal with renewed energy to love in remembrance of Christ.
Posted by wellis68 at 4/08/2009 12:28:00 PM

You are someone who is really going to change the face of what religion really is and means. You are thoughtful and I really appreciate that. Keep writing, I love reading it!

Amanda,
Thanks for reading and thanks so much for the kind words.
-Wes