Palm Sunday: welcomed by the ones who cry. 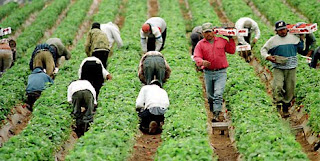 In Mark's gospel we're given a little hint as to just who it was welcoming Jesus into Jerusalem. It says, "Many people spread their cloaks on the road, while others spread branches they had cut in the fields" (v.8). They cut the branches... from the field... The people who welcome Jesus are not the ones with the power, they're not the wealthy land owners, they're the poor land workers. The people who welcome Jesus are those you see in the fields picking your vegetables and strawberries. Jesus enters in, welcomed with words of hope from those who need saving, from those to whom oppression and poverty are not unfamiliar experiences. "Hosanna!" "save us now, please save!" And Jesus, the one in whose very name salvation is written, rides in on a donkey. Jesus sides with peace over against violence, unlike Herod and Caesar, he sides with the poor rather than the oppressors. He rides into Jerusalem to start his journey to the cross and to show us what real salvation looks like... and he starts at the temple.

Whose tables do you think Jesus turned over in that temple? Was it the poor? No, Jesus turned the tables of the wealthy... perhaps the ones who owned the land from which the palms were cut. Jesus turned the tables of wealthy religious leaders, flipping upside down all they knew about power and authority. Jesus didn't demonstrate power by manipulation or by taking advantage of people. Jesus demonstrated power by siding with the poor and opening the temple doors to the oppressed making the Lord's house 'a house of prayer for all nations' (v.17) a temple big enough for all the world to worship. This is where the journey begins and ends.

Jesus had to have known that siding against the powers that be would only logically lead him to Calvary. Yet, even with such knowledge, he carried on into the city on a donkey, welcomed by the poor, to side with the least of these until he became the least of these, demonstrating true power, being hung between two terrorists.

This is the culminating truth of the gospel, that going to Jerusalem always means going to the cross, never around it... that the kind of love that comes from God cannot help but turn the tables and flip upside down our understanding, opening our temples and our hearts up to the poor and to the very ones who cry every day, "hosanna! Save us now!"