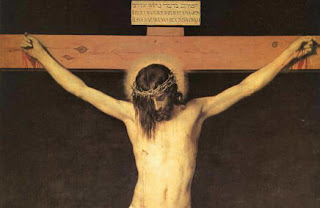 Subtle differences in our language can go a long way, it can be the difference between John MacArthur and Desmond Tutu...

We can talk about sin and the atonement in a variety of different ways and the way we choose to do it will open us up or close us. If we choose, for example, to talk about sin as a judicial case against each one of us as individuals that needs to be settled by Christ's death on the cross (because apparently "justice" calls violence and as long as somebody dies, doesn't even have to be the perpetrator, justice has been served and the wrath of God has been satisfied) we have the dangerous potential of being opened up to a view of God that is first of all, extremely abstract and second of all quite rough and vengeful. God becomes the one who sees the worst in us and we have the dangerous potential of being closed to, incapable of understanding, Christ's victory over the worst in us.

"Have you told a lie?" "Yes." "Then as far as God is concerned you are a liar." You may have heard this conversation before. This is how the whole gospel is altered, conversion becomes founded upon humankind's failure rather than Christ's victory and sin's subsequent release of us. When this is our language, God holds death over us as fear tactics in order to keep his power rather than defeating death and displaying his power by offering life. Is not, in fact, death "the last enemy to be destroyed"? Sin becomes an abstract, floating ideal, that is basically wrong because God said so, and that's it, rather than a concrete system of oppression and dehumanization which can be countered concretely however "impractically" (... I hate the word "practical"). The invitation to follow Jesus becomes an invitation to escape hell rather than an invitation to brig heaven to the world.

What if we began talking differently about the atonement? What if we spoke words of victory, proclaiming God's reign and his defeat of sin and death and all the powers therein? What if we proclaimed forgiveness to a culture that's realized its' brokenness and the futility of what they think is "life"? What if we talked of sin as complicity with the powers and principalities that promote death and hold fear of death over people in order to keep their power? Perhaps a subtle difference in semantics but one that has the beautiful potential of opening us to a God of love who relentlessly says "yes" to us, seeing the best in us and calling that reality to bare upon us. This language has the beautiful potential of closing us to, leaving us incapable of understanding and accepting the world as it is in light of God's saving love, and to the desire to be complicit with the patterns of this world. This language might draw us to salvation which is, after all, what the atonement is all about.

Christ didn't die on the cross tho convince God to love us, he came to show us what love really looks like and open us to the reality that God loves us without limit, without even limit of death.
Posted by wellis68 at 4/06/2009 11:55:00 AM