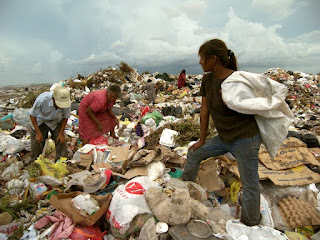 Now when Jesus used that little phrase he meant something quite particular by it, but at the same time there is more truth to that statement than he may have meant to say.

The church will always be mystically connected with the poor, their destinies and identities are intertwined and God bursts into history through them. I have suffered from some confusion thinking about the church and the poor and how to distinguish one from the other. Who is the "bride of Christ"? The church, of course, but did Christ not come to gather for himself a bride, and in doing so did he not come to proclaim good news to the poor? Did Christ not ask folks to sell all they had just so they could follow him? Are not the poor Christs bride? And who is the Body of Christ? Well, the church. Is it not the church who partakes in the Eucharist and thus is taken up into Christ's body by God's grace? Did Paul not say to the church "you are the Body of Christ" (1 Cor. 12:27), thus entangling Christ's destiny with that of the church? But did Christ not also say, "whatever you did for the least of these, you have done it for me" (Matthew 25)? "Has not God chosen those who are poor in the eyes of the world to be rich in faith and to inherit the kingdom he promised those who love him" (James 2:5)?

All the lines of distinction are blurry between the poor and the church. Mystically, but simply, the church and the poor are together in Christ's body and are together his chosen people. Christ has called the world to rightness, to be taken up into the identity of the church and to receive salvation in the poor. This is radically counter-cultural and yet it is Christ's kingdom and his Body. The church is the body of Christ and the least of these are Christ. Paradoxically they are one and the same. Therefore when we look at one who suffers, weather or not they've prayed the sinners prayer or whatnot, we should see our own body in peril. We are Christ's body and where the poor suffer Christ suffers. We are Christ's body and where one is crucified Christ is crucified and we are crucified with Christ. Thus, our end is intertwined, our resurrection is the resurrection of the poor. To the world, the poor are an inconvenient truth or even an annoyance but to the church they are our own flesh and blood.

Don't worry, this is not a mystery to be figured out, dissected, and systematically explained. This is a mystery that should always remain a mystery. This mystery calls you into it, we should live in this mystery and love one another in this mystery.
Posted by wellis68 at 3/17/2009 01:05:00 PM