Yesterday I went to a seminar called Christian Faith as Way of Life with Brian McLaren. The seminar was predictably informative and interesting. McLaren has no shortage of talent when it comes to creative communication. We started by singing the words of 1 Corinthians 13, a passage of scripture which we usually believe God “ordained for weddings…”, McLaren jested, “but He actually ordained it for life.” Throughout his talk he touched on many different things including the theme of “empire.”

He began by sharing an illustration which went something like this: 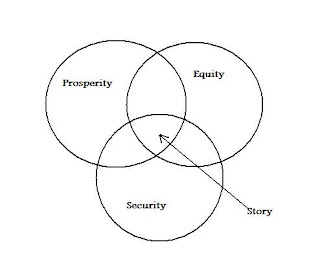 There are three things we worry about in life whether it be on a personal, social, communal, or individual level. Those things are prosperity, equity, and security. But what orders those three things, what guides our systems for dealing with life is a story. For example, there is a story which says that the world is supposed to get worse before Jesus comes… that story feeds the various crises which come up in the world (planetary crises, poverty crises, peace-making crises) rather than healing them. Another example was the claim of the Kingdom of God in Caesar’s world. To offer another kingdom in Caesar’s world would have been a very dangerous thing to do but it offered a narrative by which, if lived out, it could reverse all the curses that Caesar’s empire brought with it. (Don’t even begin to think that such a message is no longer relevant… the empire is still very much alive in the world and, at that, in the church)

McLaren suggested that the narrative by which we, in the church, most often live is one that is primarily about self (we usually use the word soul). Here’s what it might look like in illustration: 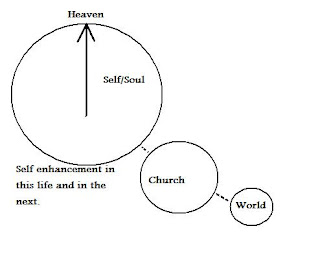 In this narrative, in this ordering story, the primary concern is personal enhancement or, to quote most evangelicals, “personal relationship with God.” It’s about God loving me and me getting into heaven. In this story it’s easy to leave the world and even the church outside of the story. They are afterthoughts at best. McLaren said “what if we start by saying ‘for God so loved the world?’”: 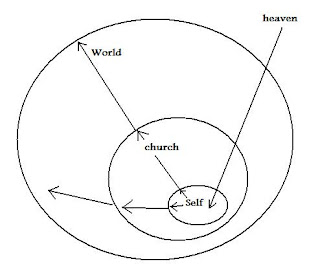 Notice that self comes last in priority but first, still, in process. Notice the direction of the arrows. World and church cannot be left out for they are where the whole process in headed. It’s not about getting self into heaven but about getting heaven into self then self, a display of heaven in life, out into the world. Conversion then, and thus the culminating work of evangelism, means being converted from caring about myself to caring about the world. This seems to better capture the calling of the New Testament and the attitude of the Lord’s Prayer—“…Thy kingdom come on Earth as it is in heaven…”

Discipleship is that life of getting heaven into us and caring for the world—joining God in the healing of the world (Tikkun Olam). It’s a way of life guided by the story of redemption rather than a set of doctrines or a system of belief. And discipleship is what Jesus called his disciples to foster in others… not belief systems.

Paul understood and taught this way of life thing and McLaren displayed that citing six passages, all of which I will make you look up on your own if you’re interested in contending or verifying McLaren’s point—Romans 8, 12, Galatians 4, Ephesians 4, Colossians 1, and Philippians 2.

Discipleship is a life entrenched in spiritual disciplines which are, according to McLaren, “actions within our power which we do to train ourselves to do things currently beyond our power, and to become people we are currently incapable of being.” We do these things because we understand that Christianity is a way of life and because we understand that the most important things about Christianity as a way of life are not things we can learn by being told or by intellectual study (ex: systematic theology & biblical exegesis). The most important things are learned through experience… like learning to play an instrument or any other art. I related it with golf—a golf video can only help me if I actually get out and golf. No matter how good you are at explaining it, I’ll never be able to learn golf unless I do it. McLaren called this “elbow knowledge”—it’s all about “way” instead of doctrine.

“If an art is lost for one generation, it’s lost forever.” What we might be doing is trying to re-piece together this lost art of Christianity, the lost art of discipleship.

“It is only when an apprentice submits himself to the authority the tradition of a master that can he learn the art, the rules of which are not even known to the master himself.” No one can write a skill or articulate a skill. “It’s embodied knowledge, it’s personal knowledge.” What if what’s happened is that the church has got the rule but not the art? Spiritual disciplines are about this reassembling of the art, the rules of which are known by no one in any way which we could ever write down as we do with doctrine all the time. Training counts! It’s about doing the sermon on the mount, listening to it with your hands and not just your ears, rather than just knowing it.

McLaren offered the example of fasting which does much less for you than it does to you. Fasting works on you, humbles you, teaches you something you couldn’t learn from doctrine or system of belief.

…but disciplines are just half of the big picture…

Making disciples is just one side of the coin, the other side of which is “sending apostles”. It’s about building communities—1 Corinthians 13 communities. McLaren pointed out that the churches that know the most about the bible are the least “1 Corinthians 13-ish” because they don’t practice it, it has remained a system of belief for their own salvation and it has not translated into a way of life.

McLaren’s closing question was this: “Does the church have a mission or does Christ’s mission have a church?”

McLaren’s message was very much a prophetically corrective message, but with that he’s correcting a church which is quite theologically disciplined but lacking in true social action and spiritual discipline. This message was so relevant and practical for me when I was entrenched in that tradition, the tradition of conservative evangelicalism. I used to be hungry, oh so hungry for a church which practiced what it claimed to preach. Ironically, now I find myself on staff in a church within a denomination which seems to need the opposite correction. I’m in a church tradition which now is quite clear about its’ social identity and activism but has an almost admitted theological ambiguity and lack of biblical-intellectual discipline. Now I want a church which preaches what it practices. I am in need of a message which helps me explain the importance of theological clarity and discipline to but flesh on the work we do and to put a sermon with the sacrament. My professor, Dennis Okholm, once said, “you can’t have a sacrament without a sermon.” So afterward I asked Brian McLaren, in so many words, “what do I do? I find myself on staff in a church which has the opposite problems I used to have to deal with. I am sort of a loan wolf for the importance of theological discipline. Where do you start in a situation like mine? Where do you begin to put the theological flesh on the work of the church? How do you begin to stress that to folks without making them into conservative evangelicals and without offering to them a narrative of self and head-knowledge?”

Now, I saw Brian years ago when I was in the opposite situation (but not on staff) and I asked him how to deal with people who you know are just not going to accept your message. Brian said that first and foremost you are to “be a blessing” and he told me about a time he was invited to a church that just was not ready to talk about the kingdom in his terms. He knew that his message, the one he’d like to teach, would have been divisive and anything but a blessing so he taught about prayer. I have since carried that wisdom with me and have tried to discern my audience and have tried to be a blessing.

Without Brian’s wisdom those years ago I probably wouldn’t have the questions I have today, I would have known just what to do… make a stink. It’s likely things would be much worse off if I had not embraced Brian’s wisdom. In trying to be a blessing, how do I stir people to theological discipline without stomping out their fervor for action? Well, Brian answered me very much in line with the wisdom he gave me years ago. He said, after prefacing that he’d not be able to do my question justice, “whatever it is they’re paying you to do… do it well.” He went on to explain that it wouldn’t be helpful for me to introduce unwelcome ideas at this point and that I should find non-utilitarian relationships in which I could express my creativity and passion for theology. “Just do it well.”

You won’t understand this unless we’ve really had a chance to talk about my recent frustrations but Brian has no idea how relevant his suggestion really is to my situation, and painfully so. Without me having a chance to really explain the heart of my situation he cut to the heart of it.