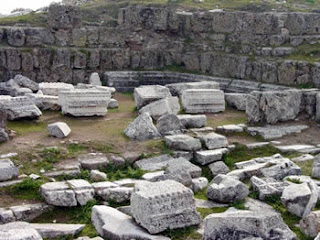 Last night I heard a pastor speak. He was very interesting and quite dynamic. He touched on many different passages including Revelation 3 where it talks about the church of Laodicea. You've heard it or read it before, I am sure. It includes the famous and often quoted 15th verse which says, "I know your deeds, that you are neither cold nor hot. I wish you were either one or the other!" And it continues, "So, because you are lukewarm—neither hot nor cold—I am about to spit you out of my mouth." You've heard it before? You've heard it preached? What does it all mean?

Our speaker last night taught it as I have so often heard it taught. He said that this passage was about having one foot in "the world" and one foot in the way of God... he talked about the dangers of hypocrisy and the problem of being a good Christian on Sunday and a sinner every other day of the week. He talked about many things which should indeed come into the conversation about this passage but it was noting new to me. I have never heard this passage preached in its' full context, I have always heard the same message preached from Revelation 3:14-22, and last night as I was reading along, the language jumped off of the page at me and I got something I had never gotten from this passage before.

Well there are three possibilities, the first of which seems the most apparent, the second of which I believe is much more likely but slightly less obvious and the third of which may be even less obvious but is still equally likely in light of the message. It could be that the Laodiceans are only saying that they're rich to sound like they have it together when they actually don't and God is gonna give them wealth if they repent (this is not likely because the passage seems to see true wealth as something altogether different). More likely than that, they could indeed have acquired the kind of wealth that Rome values but they have gotten mixed up as to what real wealth is... Or, just as likely but less obvious, they have indeed acquired some wealth but have forgotten the body of Christ. Perhaps they, the ones to whom the words are being spoken, are indeed comfortable but in saying that they need nothing they have forgotten and have cut themselves off from those wretched and poor within their own body. They have disconnected themselves from the poor and have lost their urgency in anticipating the coming Kingdom of God. They have begun to identify with the wealthy seeing themselves as part of that privileged group rather than identifying with the least of these and the body of Christ. They say, "what? oh, don't worry about us, we're good over here, we've got no worries... we are lukewarm and comfortable" as the heat of martyrs stakes are burning and the cold of poverty chills the bones of children. As poor suffer in their midst, they say "we're good." This kind of forgetfulness apparently makes God sick, he spews this sort of apathy out of his mouth.

Jesus says to them and to us, "remember... do this in remembrance of me... care for the least of these. Buy from me, the one with scars on his hands, real gold, the kind that is refined by the fires of the cross. Do not forget the least of these but participate in the body and in the blood of Christ (1Cor 10:16)." He calls them to put on "white garments." What are these white garments?

This is not the first passage in which we see their mention. Earlier, in the letter to the church in Smyrna, Jesus says "Be faithful until death, and I will give you the crown of life" (crowns are made of gold right?... that's might be important). "Until death," Jesus says. That word "until" could also be translated "unto" (as in the KJV) and it is the word ἄχρι (achri) which shares semantic relation with the word μέχρι (mechri), the word used in that famous and extraordinarily powerful passage in Philippians 2; "he humbled himself and became obedient to [μέχρι] death." He's asking the people to do what he did and to be faithful unto death, to be martyrs who care less for their own comfort than for being faithful to Christ. Then it says, "whoever conquers will not be harmed by second death" implying that whoever "conquers" (a word understood well by anyone who is familiar with the Roman empire and thus would be ironic to say the least in this context) has either already been "harmed" by the first death or will likely be so in the future. Those who conquer, those who really conquer, are the martyrs. Jesus calls them to the ironic and impractical victory that comes through martyrdom. M. Eugene Boring writes:

"As the summary accomplishment of Jesus' work on earth can be expressed simply that he 'overcame"/ 'conquered' (3:21;5:5), so the faithful Christian life can be summarized as 'conquering'/ 'overcoming.' As revealed in Jesus, the meaning of the word ' winning' is dramatically reversed."

Are you following me? Ok... hang in there, we're almost back to Laodecia.

From then on this throughout the book of Revelation this term "those who conquer" is sort of a title synonymous with martyrdom and it becomes a motif for the whole book.

In the letter to Sardis Jesus says "I know your works; you have a name of being alive, but you are dead. Wake up..." Ironically the ones who are called "alive" are actually dead, those breathing but apathetic people. Those people who are alive but are sleeping in terms of following Christ and thus participating in his death are as good as dead. In light of the martyrdom motif that is running trough this book it's quite ironic indeed that next he says "Yet you still have a few in Sardis who have not soiled their garments" there are a few who are still alive, some still participate in Jesus' death and are thus alive. The ones who are alive are as good as dead and the ones who are as good as dead are "dressed in white." This is where the first mention of the white garments in Revelation is found, they are worn by the martyrs: "If you conquer, you will be clothed like them in white garments" (Revelation 3:5)

Now back to Laodicea. "Buy from me gold refined in the fire, so you can become rich; and white clothes to wear, so you can cover your shameful nakedness." True wealth is found in gold that only Christ can offer, the wealth "refined in fire." And the white robes of martyrdom are all that can cover and overcome the cold chill of nakedness and poverty. Only participation in the death of Christ, in the brokenness of the body of Christ brings life. "Listen! I stand at the door and knock..." Christ stands outside the door of the church hungry and poor awaiting our openness to see. He knocks so that we may see that we are not rich and we have not acquired wealth but we have only managed to be blinded by our possessions to the suffering of our body and deafened to the gentle knocking of the oppressed outside the walls we have erected around us. We say, "we're good" while Christ suffers. If we will hear his voice and open the door he says

"I will come in to you and eat with you, and you with me. To the one who conquers I will give a place with me on my throne, just as I myself conquered and sat down with my father on his throne. Let anyone who has an ear listen to what the Spirit is saying to the churches."

The message to the church of Laodicea is a call to true victory through martyrdom. It is a call to solidarity with the poor and it is a call to discernment of the body of Christ. When we say "I am rich; I have acquired wealth and do not need a thing" we sever the body of Christ and we make him a victim. Let us rather hear his voice and open our doors and begin to see that we are poor. May we not get caught up in the pattern of sin and death but be carried away in the river of live which flows from the Temple of God. May we remember the body of Christ and refuse to be lukewarm but be refined in the fire which witnesses to the victory of Christ over death and be clothed in the white robes of martyrdom.
Posted by wellis68 at 1/15/2009 12:05:00 PM

OMG! I thought I was reading the blog of a very conservative YP I know, and I was shocked that the more I read it the more I agreed! Makes more sense coming from you, but I was excited to finally agree with the other guy. Maybe another time.