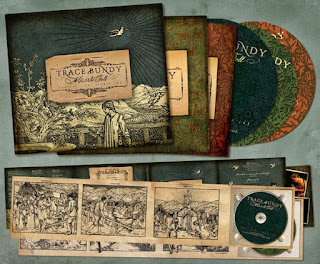 Trace Bundy, my absolute favorite guitarist, has just released his newest album "Missile Bell" the title of which was inspired by a trip he took to South America where he visited a village that had once been caught in the violence of war. The villiagers were forced to leave the villiage and upon return, their villiage was nearly destroyed.

I looked it up on google and found an article about Bundy's title on www.agros.org. If you check out the article, please take some time to browse around their site. Here's some of the article:

"The album 'Missile Bell' is named after the story of an Agros village in El Salvador called San Diego de Tenango. Tenango’s history is laced with hardship and displacement. During El Salvador’s civil war, the villagers fled the country, surviving the war in Honduran refugee camps. They returned years later to find their land destroyed and occupied. With the help of Agros, the 18 families were able to purchase property and embarked on a new life together. The families, filled with gratitude and deep faith, postponed building their own homes in order to build a church and hold a service of thanks. But they needed a church bell. So they went searching and found an old missile casing leftover from the war - perhaps similar to one that destroyed their village in the first place - and they hoisted it up on a rope, transforming it into their bell.

Their missile-turned-to-bell speaks to the power of redemption: ugly become beautiful, dead things alive, old things new. Trace took that image and wrote a song called “Missile Bell” playing ugly, dissonant chords in a way that becomes harmonious. He plays it as a proclamation of peace and a testament to the villagers in El Salvador."

Click here to read the rest of the article.

Trace Bundy's new album is some of his best stuff and he's worth your money. So click here to purchase the album. Here's a sample of his live stuff: