They Know Not What They Do.... 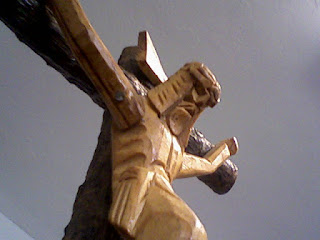 Jesus, on the cross, is not showing us "love the sinner, hate the sin." Jesus, in fact, is showing us what it means to love people in their moment of sin, in their greatest corruption. Jesus so loved the world, even as it was driving steel into his skin. Jesus didn't just love the soldiers for their potential, who who they could have been, but he loved them as they were even as they killed him, regardless of what they might become after the fact. This doesn't mean hat Jesus didn't hope for better for them (which in itself is an act of love), it doesn't mean Jesus didn't want to see the end of their sin. Jesus prays a prayer of hope, hope for better: "Father, forgive them for they know not what they do."

"...they know not what they do..." Well, yes they do! They know exactly what they are doing, they are killing a poor Jewish man who means nothing to them. They knew they were killing a regular nobody. Well, we might say, "they didn't know that this was God who they were killing" and we might ask, "what if they had know that this was God"? But the irony of that statement actually captures the point. Jesus was just a regular poor guy. It's not as though Jesus is concealing some hidden identity, like under his skin there are shiny lights. No, under Jesus' skin, under his broken body, is blood and water. Jesus is exactly who the soldiers think he is and it just so happens that that's who and where God is. God is and is where people are. God is and is where the poor are. The soldiers, in killing a regular poor guy, were killing God. The religious folks, in condemning a regular poor guy, were condemning God. And we, in killing or condemning any regular person, kill and condemn God. Sin insists that man deserves death but God insists that no one deserves death, especially death on a cross.