Politics of Divinity in the New Testament and Trinitarian Theology 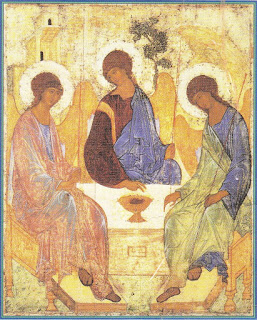 I rely very heavily on church tradition for my trinitarian theology. St. Athanasius's On The Incarnation was supremely helpful. But I am challenged by Scripture on the Theology since it is indeed strange to think of God praying to himself and sending himself, though this can be explained by keeping a distinction between persons as Athanasius does. Another great challenge, though, is that some of the common verses used to argue Trinity from Paul's writings and the other epistles of the New Testament are more political than theological and thus do not necessarily supply an argument for the Trinity.

For example, in Paul's reference in Philippians, "He existed in the form of God but did not regard equality with God a thing to be exploited," Paul is most likely contrasting Jesus with the Roman Emperors like Nero who claimed equality with God and did indeed exploit it for their own power. Jesus does not use his authority for power but carries it in defeat to the cross, claiming ironic victory through persecution (just like Paul wants the Philippians to do). So the divine authority Paul is referring to does not have to be theological, in other words he might not be saying "Jesus is God," rather he could be saying "Jesus has the authority of God, just like Caesar does, but Jesus' does not use it against people like Caesar does" thus begging the question "who do you want to serve? Jesus or Rome?" His statement is more political than theological.

When the Emperor claimed divinity (which only happened in a couple of cases and wasn't supposed to happen at all... Emperors were not supposed to claim divinity when they were still alive but divinity was ascribed to them postmortem) no one really thought that they were God with a big "G". The concept of one supreme God, like we see in Judaism and Christianity, didn't transfer into Greek thought. So why should we expect the Caesar's claim to divinity to transfer into Jewish and Christian thinking as a claim to Supreme, big "G" divinity?

When Paul contrasts Jesus with Caesar with phrases like "Jesus is Lord," while Romans were saying "Caesar is Lord," and "peace of God" while others were talking about "the peace of Rome" (Pax Romana), he isn't necessarily saying that Jesus is the God on monotheism. He is indeed saying that Jesus has authority. The New testament authors definatly see Jesus as carying the authority of God, but is that the same as seeing him as God?

Now, there are other places in Scripture where it is more obvious that the author thinks Jesus is God. Statements such as "I and the Father are one" (a reference to deuteronomy 6:4), "the Word was God," "Jesus Christ Lord of all," and "He is the true God and eternal life" help sustain the conclusion to which the early Church came to so many decades ago. But these statements are rare enough in the pages of the New Testament to reveal either that the first Christians were not fully comfortable with the incarnation yet or that it simply wasn't the thrust of their arguments. Either way, as it is with most issues in Scripture, we are left in tension. We are left to wrestle with it, perhapps forever, which serves as a reminder that God isn't concerned with us knowing all the answers... he is more concerned with us asking all the questions.

I just got to this...my computer has been non-functional.

Great thoughts though WES. I lean toward your thinking...

I think Trinitarianism barely exists in the Bible...IF I exist tradition, and tradition vouches for it, I doubt that the bible will do much to contradict it, but I don't feel it has to do much to confirm it.

That's a great take on Phillipians!

Nate,
Thanks... I really enjoyed your post which inspired this post and I forgot to post a link to it. I will go back now and add a link.