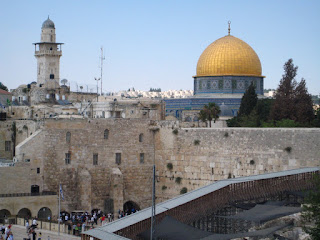 Spending considerable amount of time in Jerusalem can definitely change one's perspective. It doesn't take much walking around the Old City to get the sense that this place is divided. The atmosphere is darkened by the haze of misunderstanding and bitterness. It is ironic to be in a place that is surrounded with "holy places" but tries to keep relative ignorance of the most sacred space on Earth--the space between people. Everyone in this city seems to think that they are entitled to it, that it is theirs and nobody else deserves it. The Jews think it belongs to them because they think it's God's will and the Palestinians think it's theirs because they've lived there and have known it as home for generations. No one wants to share, and at the heart of the problem is religious ideology. The people are embittered towards one another because of years of bloodshed and bickering. For so long they have been struggling with one another and killing one another in a domino effect of animosity that was triggered and is perpetuated by religious ideals.

People condition themselves to love or to hate one another through their ideals. Ideals are not the problem, it's in what direction the ideals drive one's life that may be the problem. If our ideals identify places and things as more important than the lives of those around us, even the lives of our enemies, then that's nothing short of idolatry. The only way for true peace to exist, the kind of peace that breaks down walls instead of creating them, is for the past to become past and for the animosity of the past to become less important than the reconciliation of the future. If our religious ideals erect walls between people rather than tear them down, then we should rethink our ideals. When Christ was murdered, the curtain was torn, revenge was hardly the ideal.

Whatever your perspective of the Israeli/Palestinian controversy, having spent some time in this city, I have realized that my perspective was skewed before. The fault lies on both sides and the oppressed of the situation are far too easily forgotten in the American media. If there is one non-negotiable of the Christian faith it is hope, there is hope for Jerusalem, there is hope for the world.
Posted by wellis68 at 6/25/2008 09:29:00 AM

To learn this first hand is, perhaps, the best fruit of your trip to Israel. Share it all your life.