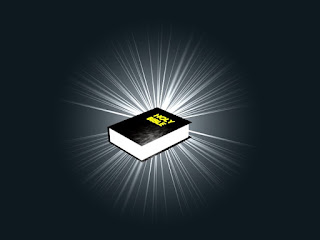 There are many inconsistencies in the world of popular biblical interpretation. There is a built-in skepticism toward any attempt to study the Bible as literature within it's various genres or does not seem to take the Bible "literally" in the same way that they do. But I have found ways to semantically agree with these conservatives. I am often asked if I take Genesis 1 (and 2) literally and I used to say no because I knew that they were asking me if I thought that it taught that the Earth was created in six twenty-four hour days. But recently I decided that there was no reason to assume that was what they meant by the question and that I could indeed take Genesis 1 literally for exactly what it was actually trying to tell the reader. So now, when asked if I take Genesis 1 literally, I am willing to say "yes, the Earth is very good," for that is one of the "literal" messages of Genesis. It's interesting that people who hold to "literal" interpretation often don't come to the conclusion that the Earth is good. All they get out of it is that evolution is false and they miss the point altogether.

Some people are very savvy about what the bible says, they know stories and verses like the back of their hands, but they have no clue how to read them. They have been equipped with words but no hermeneutic through which to understand them, so all sorts of conclusions, none of them having anything to do with the original intent of the passage, are reached. Many people have never thought to study the text as literature with any kind of genre. In fact it has become unnatural to use the words "Bible" and "genre" in the same sentence. We should start by understanding genre and context before we jump to any interpretations.
Posted by wellis68 at 5/20/2008 05:14:00 PM