I just finished writing a review of Paul Boyer’s book When Time Shall Be No More. This book traces the history of prophesy belief and Premillenial-Dispensationalism all the way from its roots to the current situation (at least current to 1992). This book provides extremely valuable scholarly work tracing an extremely pervasive theological perspective on history and apocalyptic literature.

This book got tedious near the end because it became obvious that the logic and rhetoric of dispensationalism was generally recycled over and over again. However tedious it was, I continuously felt thankful that someone, especially someone as responsible and fair as Paul Boyer, has done this hard work and made it available to us. The only flaw is that it is older. Left Behind wasn't even published yet. There's so much current stuff that could go into this book.
This is really a worth-while read! 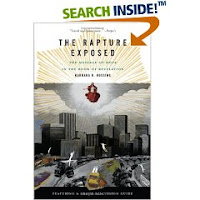 If you're looking for a more up-to-date (meaning after Left Behind was written), more accessible, and shorter book, that is less "objective," you should try the Rapture Exposed by Dr. Barbara R. Rossing. She actually cites Boyer a few times. Great read as well.

I'll have to check those out...I wrote a post (very, very brief) on the rapture: http://natewatson.blogspot.com/2008/03/rapture.html
I admire you tenacity in posting daily!