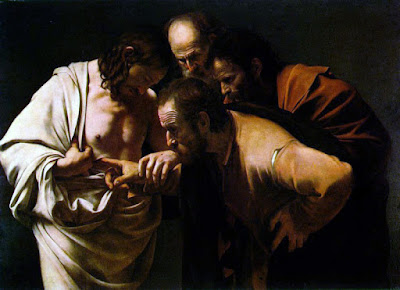 I believe that the Bible might preach a "prosperity gospel." God wants us to be prosperous. When Jesus died on the cross, he defeated all the principalities and powers of the earth, in His resurrection, he emerged from the tomb "successful" and "prosperous"--the essence of life and victory over death...

But when Jesus placed his feet on the ground and walked from the tomb he still bore scars. Jesus still bore the signs of his crucifixion--the ultimate sign of death and failure. Jesus, in victory, still looked like a failure. Jesus, even in victory, was a walking symbol of his own utter destruction. Jesus' prosperity still looked like failure. Everything about his body was still poor and persecuted, yet he was still drenched in life. Jesus' will always have been a crucified Messiah, a failure, but even as such, he is victorious.

God wants us to be "prosperous" but God, in Jesus, made it so that the words "prosperity" and "success" just don't mean the same thing any more, they actually might not even work at all. Jesus calls us to a victory that will always look like defeat. What does martyrdom accomplish? Nothing, by the the standards of economics and social status. Can death bring prosperity? Not the kind that manifests itself in "the American Dream" or in big houses and five seater SUV's. But Jesus and the New Testament continue to insist that what looks like defeat to us is our victory. What will always look like failure to the world will always be resurrection to us. What looks like victory to them looks like defeat to us.

So be prosperous, and remember that prosperity has nothing to do with money, social status, economic advancement, or comfort. Success has nothing to go with winning or attaining... like I said... maybe these words don't even work anymore.

The verse that might have shown up most often, on bumper stickers and license plate frames and such, throughout my experience here at APU, was Jeremiah 29:11
"For I know the plans I have for you,' declares the LORD, 'plans to prosper you and not to harm you, plans to give you hope and a future."
Posted by wellis68 at 4/25/2008 11:34:00 AM

Man this ruined my day. After all the money I sent in to TBN I was assuming that the free Bugatti I had told God I needed was just late in divine delivery. I even told him the free eternal Salvation He gave just didn't make me look pimp enough in front of my friends. Rats. I guess from now on I'll have to divert my money to the poor and widowed.

Nate,
hahahaha
You make me laugh!
It's true... I guess when we give up on economic prosperity, all we can do is what we should have done all along.