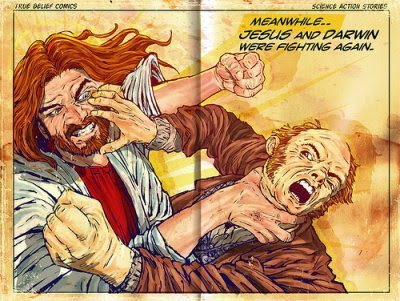 This morning in Sunday School with the youth group I help out with, they had a guest teacher. He was a high school biology teacher, which was supposed to give him some credibility, and he came in to begin his two part lesson on why evolution is wrong and intelligent design is right. I have a feeling with Ben Stein's new movie "expelled" being out in the news, there is going to be a lot of hoopla about the whole evolution and creation debate in evangelical churches (here we go...).

This morning our guest speaker, the biology teacher, made it really hard to take him seriously from the start because near the start of his presentation he told us all that Charles Darwin recanted all his teachings on his death bed. This revealed his strong bias (which I guess he all wanted us to know anyway, so it didn't matter) and passed on a great myth. He told us that there were "writings" that proved, in some way, that Darwin became a Christian right before he died. I was very tempted to ask him where I could read these "writings" and where he found them. I didn't want to do that because there is simply nothing that exists, no writings or any credible statements, that say that Darwin recanted. It's simply a myth created by Christians who felt threatened by evolution. (here's an article that talks more about this: Did Darwin Recant? Ironically, this is the first article that shows up if you google search "Darwin" and "recant"... it doesn't take a great deal of research to realize this is a fable)

Throughout the rest of his talk, as I watched the girls in the corner nodding their heads to his ranting, my "straw-man" flags were going up. Everything he said painted evolution out to be some fallacy built on lies. Even I, from my non-scientific perspective, could tell that every argument he was exposing as "messed up" was actually much more complicated than he was letting on. By the way he was talking about it, and by the way most evangelicals talk about it, no one who's smarter than an ape (excuse the bad pun) would be an evolutionist. If it was all as simple as Christians make it out to be, no one would be an evolutionist unless they were idiots. Christians too often talk as though the options are to be a Christian or to believe in evolution, as though Christians would be denying Christ in accepting evolution. This makes for a very simplistic and superficial view of Christianity as well. What happens when a student gets to college and begins to realize that it's not all as simple as their high school biology/Sunday School teacher made it out to be. What happens when they see that evolution actually makes a great deal of sense...? Well, I guess they'll just have to choose. I'll bet, if faced with that choice, many would choose evolution (especially since their exposure to Christianity was superficial as well).

The fact is, the people with the most sophisticated understanding of Christianity and evolution will most often see that the two don't have to be chosen between. Evolution doesn't automatically mean that there is no God. Only a view of evolution that doesn't really understand God (though, I hesitate to say that anyone "understands God" I hope you understand what I'm trying to say). When it is understood in context, there is nothing in Scripture which refutes evolution. That type of science, with its enlightenment influence, wasn't even conceived of yet. Whatever your thoughts, we just shouldn't paint things to be so simple, especially thins as complex as Christianity and evolution, and then ask people to choose. Sure, believe in evolution, also believe more deeply that God is intimately involved and sovereign over every work done beneath the sun and has been since before the sun existed. You may find specific implications with which you'll disagree, like that God doesn't exists, and so disagree with them, but don't throw the baby out with the bathwater because you feel threatened. The Biblical narrative isn't threatened nearly as much as most Christians seem to think, by evolution. From within the Biblical narrative, you start from the presuppositions of Scripture, not of science (and yes, science starts with presuppositions), but the presuppositions of Scripture do not include the age of the earth or the amount of time it was created in (If you think the point of Genesis 1 is 6 day creation, you've missed the point).

Christs need to gain a sophisticated understanding of their texts, their faith, and evolution before they start narrowing our options.
Posted by wellis68 at 4/21/2008 02:46:00 AM

While the Bible is not a scientific text, it glimpse into the nature of God, and God, in scripture frequently uses process as a means for accomplishing the divine (i.e. Jesus mixed spit and mud to heal a blind man's eyes...he could have merely spoke healing into existence).

Personally, I don't know where I stand. If someone wants to believe and teach in the pulpit that God did not use evolution, or the opposite, either way, it is their right to hold an opinion, so long as it doesn't bypass right doctrine. So I try not to get bent out of shape regardless of who is teaching what. I guess I just don't care too much about the issue...but I should.

Honestly, Nate, I don't usually care too much either. I happen to be of the persuasion that evolution is a perfectly credible way of looking a things. I just don't like it when people take advantage of students by building a straw-man out of it. When students discover that evolution is actually good science, they'll think they have to abandon their faith. I don't care what scientific conclusions people come to, science operates on a different level than scripture. As long as they don't act like they have to choose between good science and Christianity.

I haven't visited your blog in a while, so I am wondering, whatever became of your youth pastor job interview at the church you grew up in? Did they offer you the job? If so, are you going to take it?

Kjkeb,
Thanks for asking! I am still in the process, so I didn't want to say much about it until I got the job for sure. I believe they will be offering the position to me soon. I'll be sure to post about it when it's official. Thanks again for stopping by and for remembering.
Shalom,
Wes

The more that I study the Bible, the more I wonder if evolution and creation may be intertwined. Are evolutionists and creationists alike looking in the wrong areas, clouded by presuppositions? God is so much bigger and intense than our feeble attempts, even as of late, to define and contain Him. I think that even grace goes much, much further than ever imagined. Great post.

James,
I can't agree with you more.