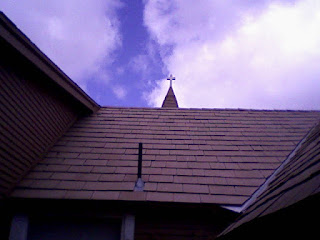 I recently posted here about the church in Ramona which has parted with a local ministry due to questions of theology. I had trouble with the whole thing because I couldn't understand how a theological disagreement should stop us from working together toward what is obviously good. Well, Saturday I made it down to Ramona just in time to have some coffee with my friend who happens to be the Youth Minister (and one of the members of the leadership who signed the official letter, informing In His Steps of their removal from service with them) of the church which left In His Steps. At first he and I discussed normal things like school and relationships. We talked about what I was learning and about what he's been working on (he has a Master's in Philosophy from Biola University's Grad program: Talbot School of Theology). Then the conversation got frustrating when we finally started talking about the elephant in the room. As he explained all the problems he had with In His Steps' prayer ministry (which I will remind you is only a small part of their overall ministry of freeing people from drug abuse and alcohol addiction) I could not understand how these differences were big enough to stop him from joining in something so obviously good. As I explained to him why I thought his decisions were based on distortion of priority, he couldn't seem to understand my willingness to partner in mission even with people who aren't Christians. He was essentially saying that In His Steps was using the Bible as a "after-thought" in their prayer meetings and were therefore compromising the authority and perfection of scripture, which is to him a non-negotiable of the Christian faith. He said that his "Christian conscience" would not allow him to give any money to an organization which did not share his fundamentals... which were many (including the virgin birth). Whereas I am willing to join with people in Kingdom work even if they don't believe in the Kingdom of God at all, my friend would not support any ministry that is not distinctly Christian (and distinctly fundamentalist Christian).

When I asked him about my church and what their beef with us was and why they said things about us that weren't true, he shifted the conversation to "post-modernism." I have never known an educated philosopher who had such a negative perspective on post-modernism. I guess he thought our liturgical church was just too postmodern.

It was a frustrating and discouraging conversation because I have dreams of doing work in Ramona with all different kinds of churches. I have visions of laying down our theological defense-weapons and our disagreements at least long enough for us to help people. But as long as there are people like my friend, this will never happen until every Christian in the world becomes a fundamentalist. My dreams have never felt so far away.

On the lighter side, I had an exciting conversation--the reason I went to Ramona in the first place. I interviewed with my home church for the Youth Pastor position. I think the conversation went very well, as I was able to share with the search committee my dreams for our church. Now I think all we have to do is talk money (I hate talking money). This is exciting if I get the position and if I get a deal that I can live off of. I have felt called to this church for a long time and I am excited to finally know for sure what all this education for the past four years has been about. Keep me in prayer.
Posted by wellis68 at 3/31/2008 04:02:00 PM

I haven't visited your blog in a while. But I stopped by tonight to see what you are up to. It looks like all your years of education are about to launch you out into the world of full time Christian ministry. I am reminded of the words of Dickens that open the classic book A Tale of Two Cities.

OK, so that was written in past tense. But I think it conveys the days that are ahead for you.

May God bless you in this assignment and the next.

Thanks for stopping by again and thanks for the kind comment.

Bro, I totally understand how you feel regarding your youth pastor friend. I've definitely been there with some of my friends too.

Regarding his dogmatism, I was talking with a theologically-minded church friend of mine yesterday, and he made a good point that in many churches, there is no such thing as heresy. You're either a Christian or you aren't. There really isn't such a thing as theology either, since all that matters are the core doctrinal points.

And Biola (and specifically Talbot) has a major thing against Postmodernism. In all my papers on Postmodernism, each one argued against at least one Talbot professor (and a few papers argued against multiple positions of multiple professors). While I think Biola is a great school for some things, their theo dept is a bit on the modern/anti-postmodern side.