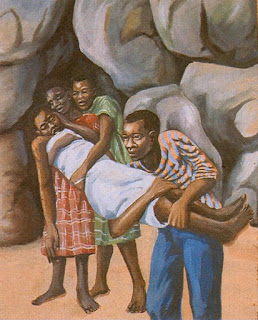 "Jesus lay dead, a corpse, a nothing, all day long on Holy Saturday--defeat incarnate. Easter Sunday--the first day of the new creation and the eighth day of the old one--is the Father's resounding "Yes!" to the Jesus whose end was the most intimate solidarity with the dead and damned. When he comes out of the tomb saturated in the overwhelming life of the Spirit, hope rings through all the tombs and detention centers of this wicked world."

On the seventh day God rested
In the silence of the tomb;
Having finished on the sixth day
All his work of joy and doom.
Now the world had fallen silent,
And the water had run dry,
The bread had all been scattered,
And the light had left the sky.
The flock had lost its shepherd,
And the seed was sadly sown,
The courtiers had betrayed their king,
And nailed Him to His throne.
O Sabbath rest by Calvary,
O calm of tomb below,
Where the grave clothes and the spices
Cradle Him we did not know!
Rest you well, beloved Jesus,
Caesar’s Lord and Israel’s King,
In the brooding of the Spirit,
In the darkness of the spring.
_N.T. Wright

On this Holy Sabbath, the Lord rests in the tomb. Dead... actually... physically dead. He was tortured, murdered, and is now buried. As Crag said, Jesus is in "the most intimate solidarity with the dead and damned." He has returned to dust without hope of breath, he has been reduced to nothing. Oh how the dust cries out for breath! How long will it be ignored? Breathe, oh God, into the nostrils, the breath of life. We now stand, silent, between the realities of a dead Messiah and a torn curtain.
Posted by wellis68 at 3/22/2008 11:00:00 AM

You always have to go and do something crazy like make Jesus a black man.

Don't you know he was white?