Enough to Make You a Calvinist 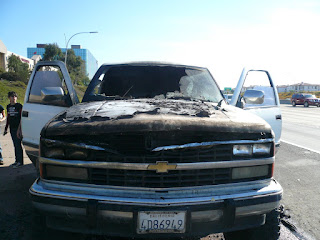 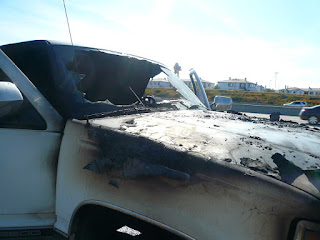 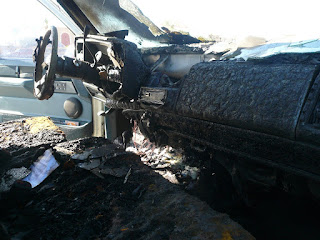 "Are we overheating?" I asked, as Ty was pulling his full sized Chevy truck off of the right shoulder of 15 freeway. We had been having some car trouble on our way North from Mexico (returning from our church trip to Tecate).
"yep!" he said, as the engine began to die.
Out of the corner of my eye, I could see a car slowing down and a man yelling at us out the window. I heard, "You're on fire!"
"Fire? oh, we'd better get out." I said, probably too calmly.
We got out and, surely enough, there were flames coming out of the engine behind the tire. As though someone planned it, immediately after we stopped, realized we were on fire, and exited the vehicle, a car pulled off the freeway in front of us and a man with a fire extinguisher rushed over to us. He and Ty were frantically trying to delay the inevitable and to pull all our stuff out. I called 9-1-1 (which takes way too long from a cell phone) and told them where we were and what type of car we had (I was tempted to say, "the one that's in flames"). As I was making this call, another man with a smaller extinguisher joined to help. Right after I got off the phone, two U.S. Forest Service engines (46 and 43) pulled over and started dousing the flames. I later discovered that the forest service trucks had nothing to do with my 9-1-1 call and they were just on their way to the academy and happened to see smoke. Right after they arrived, the big red San Diego County engine showed up in response to my call and finished the job. Right after that, two of the vans from our church group pulled in and just happened to have enough room for us and our luggage. This was about the same time the tow truck arrived. So we simply threw our stuff in the vans and continued home.

Everything happened so fast. And between the guy yelling, "you're on fire!," the two guys with the fire extinguishers, the two Forest Service trucks, the red truck, and the two vans who picked us up... not to mention the location being in San Diego (with which I am very familiar) rather than Mexico... there was enough twist of fate to make you a Calvinist.

Calvin is only good with Hobbes.