The Torture of Jesus 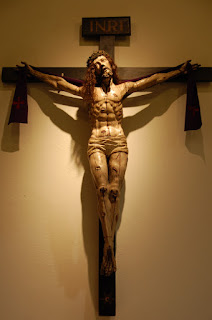 The torture of Jesus is slowly becoming about as important to me as his death. It can be easy, though there’s no reason for this, to place Jesus’ death in the realm of abstract thought. But the thought of torture couldn’t be more concrete.

How often do you think of the torture and death of Jesus as an injustice? Perhaps you’re used to thinking of it as just a part of the plan, an event which was supposed to happen. Now, that idea works out well abstractly—“Jesus died for my sins” (a true statement with very untrue implications). But if you bring it back down to earth, you are saying that it was just; in fact it was divinely ordained, for an innocent man to be whipped and beaten, mocked and executed by an oppressive power. We should see this, and the contemporary readers saw this far too routinely, as a terrible injustice which we can find and recognize in the world which surrounds us. Jesus, being whipped and nailed to a cross, becomes a symbol (though the word “symbol” is not nearly strong enough) of oppressed peoples all throughout the world and throughout history. Thus we cannot ignore “the least of these” any longer. This is the incarnation: the violation of the rights of God and people, and the vindication of God and people over their oppressors through resurrection. If we are followers of Christ we must recognize this event and the events of oppression we see all around us, not as necessary for the greater good but as displays of evil to which there must be a response. The torture, death, and resurrection of Jesus carry huge implications for the salvation of the world. God responded to Jesus’ torture and death (though he didn’t stop it from happening) by vindicating him through resurrection. How will he respond to the torture and death of the oppressed? He does it by way of vindication. Yes, this should make the oppressor nervous.

Was the death of Jesus also about the forgiveness of sin? Jesus said it himself, that his shed blood was for the forgiveness of sin (Mat 26:28). On the cross (once again keeping incarnation in mind) Jesus forgives even those who oppress him. I cannot even express the power of those words, “forgive them, for they know not what they are doing.” Jesus ushers in a revolutionary response to oppression. It’s not violent revolution or systemic overthrow. It is forgiveness. God forgives the oppressor—all those working against him. But it is not the sort of forgiveness which gets us off the hook so we can simply live comfortable and ignorant lives. Our calling is to live lives of forgiven people—to live lives worthy of the gospel. Our calling is what Jesus said it was—“as the Father sent me, so I am sending you” (John 20:21). Our calling is to follow Jesus to torture, to death, and to resurrection. Our calling, as forgiven people, is to usher in a culture of forgiveness. Our call is to see Jesus in the oppressed—in the “least of these” (Matthew 25).