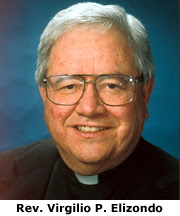 This quote speaks for itself:

"The high standards of living of the dominant culture cannot continue without multiple sacrificial victims. Their profits depend on the blood and sweat of poor and defenseless people and nations.
Jesus went from a life that had many ways of segregating people to a new fellowship inclusive of everyone. The minorities today are not looking to simply blend into the system that has previously kept them out. We are searching for a new and more inclusive society where no one will have to suffer the pains of separation that discriminated cultures have suffered in the past. The most beautiful image and powerful activity of Jesus was that of inclusive table fellowship. All the outcasts, all those who had been kept out by the pure and dignified of the dominant society, were now invited to enjoy the table. The irony of the table fellowship of Jesus is that not because anyone is excluded but precisely because everyone is now invited some will not want to come. The joy of the new experience becomes generative of a new movement for humanity.
Jesus moved from the culture of sacrificing others for one's own gain to a new culture of sacrificing self for the sake of others. This new culture would become known as Christianity. It is important to see the sacrifice of the cross not as the one sacrifice of Jesus but as the final movement in the sacrificial process of an entire lifetime, a life that refused to victimize anyone. Jesus sacrificed himself in many ways to redeem and rehabilitate the victims of the world. He was the victim who did not become a victimizer. He always offered something new and surprising. He went from being a victim to being a liberator, a generator of new life. Like Jesus, out of our own suffering today we are called to usher in something new so that all of us together, in new partnership, may have a better life. Out of the wounds and pains of cultural poverty, new cultures will emerge, and that will be a gift not only to the poor but to all of humanity."
_Virgilio Elizondo
(Daniel G. Groody, The Option for the Poor in Christian Theology, pp. 167-168)
Posted by wellis68 at 1/29/2008 03:01:00 PM