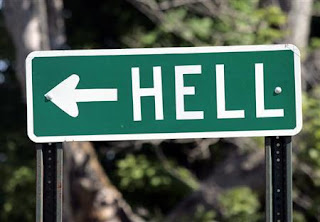 Today I was reading through For All the Saints by my favorite living author, N.T. Wright. It’s an extremely short one for him (only 76 pages) but it’s extremely interesting.

I was reading his section on Hell. Now, if you remember, I spent a semester studying Hell as an independent study with Dr. Dennis Okholm and at the end I concluded that the Bible doesn’t speak as much on the subject as we may have expected. What the Bible focuses on is the "Hell" that’s here and now, rather than any specifically post-mortem destination. In trying to make a theological decision about Hell from a Biblical standpoint I had to plead lack of information (of course being pressured by the traditional presuppositions I had) but from a philosophical/theological standpoint I forced myself to make a decision. (read it: “Hell”)
I argued, rather hesitantly, for what’s called “annihilationism” by Clarke Pinnock and “conditionalism” by N.T. Wright. Until this point I really wasn’t sure what Wright would say about it because he’s much more focused on the Biblical narrative than theological inferences. But today I was, I admit, relieved to get a glimpse into Wright’s mind, giving me a little more confidence in my conclusion. In For All the Saints, Wright discusses the liberal view, namely universalism, and mentions the “traditional teaching of conscious eternal torment.” Then he refers to annihilationism or “conditionalism.” He continues:

“With a middle position being that of the ‘conditionalists’, who teach that, since humans are not by nature immortal, only those who are saved are granted immortality, so that all others are simply extinguished… I don’t find any of these three traditional options completely satisfactory, but I think a somewhat different form of conditionalism may be the best we can do.”

This is encouraging already, N.T. Wright may not be a full-on annihilationist but He seems to suggest that it has some merit and in one form or another it may be the “best we can do” in light of the lack of direct Biblical reference. He also adds a perspective that I didn’t discuss in my paper—the image of God. He continues again:

“The central fact about humans in the Bible is that they bear the image of God… Humans are summoned to worship and love their creator, and to reflect his image into the world. When, however, instead of worshipping and loving him, they worship and love that which is not him—in other words, something within the order of creation, whether spiritual or material—they turn away from him. But they can only be maintained in his image, as genuine humans, by worshipping him; they depend on him for their life and character. The rest of creation, by contrast, is subject to decay and death. If we worship it, or some part of it, instead of the life-giving God, we are invoking death upon ourselves instead of life. This opens up a possibility: that a human being who continually and with settled intent worships that which is not God can ultimately cease completely to bear God’s image. Such a creature would become, in other words, ex-human: a creature that once bore the image of God but does so no longer, and can never do so again.”
[N.T. Wright, For All the Saints (: Morehouse Publishing, 2004) 43-44.]

This ex-human existence seems to be in line with the Biblical narrative. Worshiping God is the most human thing we can do. Not doing so would be less than human--complete alienation from that which defines our existence. This ex-human condition might also be a sort of destruction especially if it’s, as it is with the rest of creation, “subject to decay and death.” It’s bodily resurrection that we’re after, isn’t it? Not some floating-on-clouds experience. And who was raised from the dead? Christ. Only those in Christ are resurrected, right? (We’ll have to talk about the cryptic verse in Daniel some other time) Maybe it’s not absurd at all to think that death is, as it is generally in the Old Testament, just death and only those in Christ will experience life again in resurrection. In other words, it doesn’t seem too absurd to say that Hell is destruction, leading to non-existence (and eventually unconsciousness, by implication) as with everything else that isn’t redeemed, thus rendering the ex-human exempt from resurrection, let alone resurrection to eternal life. I don’t know about you, but either way, whether hell is eternal punishment or eternal death, I’d rather have life in resurrection.
Posted by wellis68 at 8/18/2007 04:22:00 PM

I am a fan of Wrights and while I don't think we "know" exactly how hell is or isn't going to play out, I love that a man can humbly and graciously try to find a way that is true to scripture...both that there is a hell and that God will restore all things. With the idea of an "ex-image bearer" Wright may be on to something.

I more or less agree with conditionalism and I enjoyed how Wright supported it philosophically.

I appreciate very much NT Wright. Wright's view is quite similar to that of C.S. Lewis as found in "The Great Divorce" - although it seems that Lewis was not prepared to totally close the door on universalism as some ultimate reality unfathomable by creatures in the present space-time continuum. (His spiritual mentor George MacDonald was a universalist).