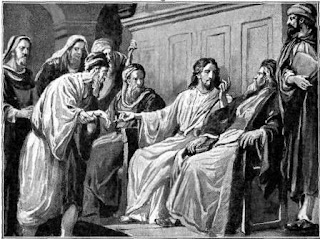 "If you are neutral in situations of injustice, you have chosen the side of the oppressor. If an elephant has its foot on the tail of a mouse and you say that you are neutral, the mouse will not appreciate your neutrality."
_Desmond Tutu

Once there was a man with nerve damage in his hand—an incurable ailment at the time. Some very religious people who believed that the Sabbath day should be kept holy as God had asked them to keep it brought him before Jesus. Now, for them it was ok to save life or to kill in self defense on the Sabbath, this wasn’t considered work, but no minor healing was legal on this day. They asked Jesus if he’d heal the man. They assumed that they had a chance to arrest Jesus if he answered wrong but Jesus turned it around on them. He had the man with the shriveled hand stand in front of them in the synagogue and he asked the religious men, “Which is lawful on the Sabbath: to do good or to do evil, to save life or to kill?” They were confused at first, they thought there was a distinction between doing something as small as “doing good” and something as big as saving life. They thought there was a distinction between “doing evil” and killing. But for Jesus doing good is the same as saving life and killing is the same as doing evil. For Jesus there is no such thing as neutrality.

The religious people looked at each other and couldn’t give an answer; they were too concerned with their own definitions of good and evil and what it means to celebrate Sabbath rest. At their silence, at their hardness, at their neutrality Jesus became angry! Jesus then asked the man to hold out his hand and at that the man’s hand was completely healed.

Jesus was angry at their neutrality. For Jesus their reluctance to do good on the basis of religious law or divine ordinance was worse than if they’d done evil themselves. Jesus was angry that they wouldn’t act in the face of what should have been an obvious decision.

Are you acting in the face of evil? Is Jesus angry at your neutrality?

Do you suppose there is any similarity in God's disdain for the lukewarm church at Laodicea? It was neither hot nor cold and God said he would "spue" (Rev. 3:16 KJV) it out of His mouth. Do you suppose it is sometimes our lack of passion that God dislikes?