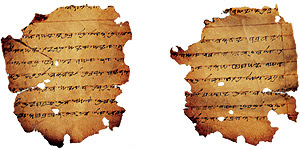 Last Sunday my parents, my girlfriend, and I went to the Natural History Museum in Balboa Park to see the Dead Sea Scrolls that were on display there. Of course, not all of them were displayed at the same time but this is the largest Dead Sea Scrolls exhibit every to be displayed anywhere and it's right here in San Diego.

I was very glad that I have studied some Hebrew the past two semesters, otherwise I wouldn't have been able to fully appreciate how incredibly arduous a task it must have been to translate the text on the scrolls. If it weren't for the translation posted on the wall next to each station I would have only understood a word here and a word there. Viewing the exhibit was a once in a lifetime experience.

Seeing the scrolls helps put things into perspective. Among other things it shows what we're 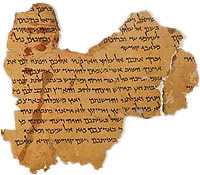 dealing with when we talk about translating the Bible and it shows us the work which went into preserving the texts, which were to them, stories of their identity. We often see the Bible as a book of who God is but how often do we see it as a book of who we are? To the Essenes (or whoever wrote/preserved the Dead Sea Scrolls) these texts were stories of how they got to where they were and where they were going. How precious these texts were!

It was such a neat experience to go see the scrolls.

I think the thing I got most out of it was that these were writings to people about life and how to live SO long ago, and yet they still, for the most part, apply now. I think we sometimes forget that we've had the same emotions and thoughts since the begining of time.

It was a great peice of history and I am glad that I got to experience it with you. I'm glad we're both nerds :)

Hi i just surfed in searching for interesting facts on Essenes in the blogs.
you have a cool blog. Do keep up the good work. I'll be back for more. i live
far from where you live. its nice to be able to see what people from across
the world thinks.

On a related note perhaps you might find the following article interesting.
we are currently doing a series of posts on essenes and their culture and i'll
like to hear your take on the subject via comments. See ya there....

Warm Regards from the Other Side of the Moon.
Bijoy Cletus - Kerala, India

hebrew takes a LOOOOONNNNGGG time to translate. Even modern hebrew takes me about an hour per page.

That's interesting that you got a guy from India to comment on your blog. This internet thing is a mindblow.

This is not without controversy.

The Natural History Museum has been accused of giving an inaccurate picture of current research developments, and the Nowpublic site is carrying a piece that documents the Christian Fundamentalist connections of various people involved in preparing and choosing the content of the exhibit.