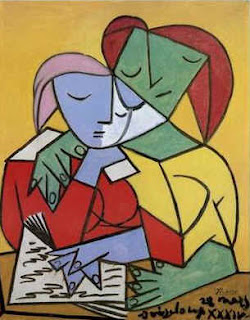 "Art is the lie that enables us to realize the truth."
_Pablo Picasso

Do you ever wonder if our insistence that everything in the Bible be "true" takes away from the truth of it all? Perhaps we need revive our appreciation for the truth that's found in myth and in the simple beauty of the story. Is it really all that important that it actually happened if it doesn't really happen now? It doesn't really matter if it happened if it's not something that happens now. The Bible is literary art as much as it is anything and when it comes to art you don't really care so much about weather or not it's scientifically accurate, you don't test it up against historical analysis and scientific experimentation, you look for the truth beyond the brush stokes you find the truth in the simple beauty of the piece. And what you find is that the truth that we find in art is often much more piercing, much more challenging, much more raw, and much more trustworthy than any truth we could find in a scientific document.The truth in art speaks louder than words. The truth found in art is a truth that happens within us and is happening within us even as we gaze upon it. It's true, so weather or not it happened is irrelevant.

wow. i hadn't heard the Picasso quote before... Plato said that art was the lowest form of things because it reflected physical objects which in themselves were reflections of the heavenly Forms. but i think i like Picasso's take on it better.

Justin,
wow... isn't that interesting? Yet who do you think we get more of our ideas from, Plato or Picasso? Sometimes it scares me how much more we conceptualize God from Platonistic philosophy than from biblical narrative.