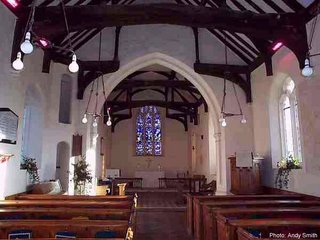 What if I told you about a community of people who were fully committed to each other all of whom have vowed to live a certain kind of life; committed to simplicity, purity, and obedience? What if I told you that there was a gathering of people who've decided to re-think what we call "church" in search of what is truly at the heart of God for church? How would you respond if I described a higher commitment than your average church where the highest form of commitment is being there twice a week to study the bible and sing worship songs? What if I described a people totally committed and interdependent on one another; committed to being transparent, honest, and loving toward one another? What would you think of a community like that?

When I went to my friend Steve's wedding (congratulations Steve) in Port Angeles, Washington I tried to describe to him this kind of community. He listened and asked questions about it... "Do they read the bible? Are the gifts of the spirit visible?.. etc." After a while I thought that he was sort of getting it. He then turned to me and said, "Wes, that sounds like a cult..." I laughed at first but then it got me thinking.

Later on in the week, after the wedding, I was being driven to the airport by two people I've known for quite a while. Somehow the topic came up again. Again, I described this community but this time I was extra careful with how I described it. I used a little bit more "christianese" wording in hopes of making it sound more normal. Once again, I thought I was doing a good job but just then my friend in the passenger seat said "now Wes, this isn't a cult is it?"

It does sound weird doesn't it? We have good reason to be skeptical; there have been too many cults and splinter sects to go off in a strange direction and end up somewhere south of where they started. But what the skepticism means is that it's foreign. Now when I describe this sort of church, where people are trying to live out community on a daily basis instead of just once or twice a week I expect people to get excited. I expect people to say "that's what church should be like" instead I hear "that sounds like a cult." Should this kind of commitment be so foreign to us? Perhaps what this means is that true community, the kind God wants for us, is so difficult and such a high commitment that we've been hesitant to dive into it. So hesitant that nobody's been doing it. We're too afraid to allow our relationship with God to be more than personal. We're too afraid that if it's this difficult no one will do it and evangelism will cease to be effective. We're too afraid that people will think we're a cult. We're too afraid that if we offer something like this it will be turned down.

Church history is filled with revolutionary people who went off the deep end in their time and ended up changing the world. People were not accepting of St. Francis when he began what eventually became the Franciscan Order. Saint Augustine's methods were new for his culture, totally foreign, and yet he's called the father of Western Christianity. Martin Luther could have easily been killed for his revolutionary faith yet he's also changed the face of our popular Christianity. Philip Jacob Spener's colleges of piety might have sounded cultish if it were described to you today. John Wesley's "holiness club" would have sounded questionable to say the least. The list goes on with people all trying new things in order to find God's heart. All of these people are heralded as pioneers of faith who bravely changed Christianity for the better (at least in their historical context).

So what if you tried it? What if in your town you stepped out with a few friends and upped the commitment? What if you really began to live out "church?" What if you ventured into the kind of community that isn't convenient or comfortable? What if church wasn't what happens on Sunday morning as much as it was what happens throughout the week as you open your life to the Body of Christ and strip away all your masks to them, letting them see what's really going on in your life, your family's life, and your relationships especially when you don't want to? It would be dangerous. It would sound strange to people, it would be uncomfortable, and it would be difficult. You have to ask yourself what does community really mean and is it really important enough to me for me to sacrifice myself to it. Because that is what you are doing; you are giving your entire self, holding nothing back, to the church and to God. Would that be worth it to you?
Posted by wellis68 at 8/30/2006 11:14:00 AM

Why doesnt anyone associate your description of community with an army?

As I was reading, I was thinking a couple of things:

1) if you were signed on to die, to actually give up your life, what would your devotion to others look like? I mean, like you said, what if the community was more of a through the week thing than just a Sunday get together?

Actually, I think it is more of a Sunday get together thing in the end, but what if the rest of the week kept pace with Sunday and Sunday was celebrated like the 8th day of Creation? Then the whole thing would be different... wouldnt it?

I think most Christian folk really have no ambition to see their lives truly changed, they still want to shop at the mall, or Barnes&Noble, they still want to have a retirement plan and nice clothes etc. They still want to travel the world and see all the sites etc. And there is nothing inately wrong with any of that stuff, but put it all together in a single person (or better yet a whole culture) and it is a way of life. But it is not the Christlike way of life. It does not change the world, it indulges it.

On the other hand, an army changes the world. An army roughs it. Soldiers put their lives in each others hands. They take risks and plot campaigns. The see the world they way it will be after they win the war, and they lay down their lives to play their part. They embrace strict discipline. They lose their selves for the sake of the unit. They are dedicated to the cause. But not most Christian folk I know.

2) I forgot two. I have been interupted twice here. Maybe I will think of it later....

I'm glad you made the changing the world association. That's the real mission of community. It' not just for itself, it's at its best when it gives itself away. Its purpose is to give itelf away.

huh. it's funny how much the word cult has been thrown around lately. but i think you are right-- it sounds like a cult becuase it is abnormal. its risky. in america we are so used to this clean-cut, structured, individualistic sort of life than this idea we are living out where we actually give up the rights to ourselves and live for someone else is strange--- it does look like something dangerous and scary. we are risking that this might actually be a better way to live. In my speech class we are giving wedding toats this week and something in one of my peer's speeches stuck out to me. He said, "Marriage might actually be one of the first times in our lives that we lived for someone other than ourselves." and I just thought to myself, what a tragedy.

i think one of the reasons every one thinks of a cult when commited community is mentioned is that its one of the only examples of commitment to one another (missguided but still commited)we dont know how to be radical or evan commited to anyone other than ourselves(our culture sucks). we refuse to exept somthing that helps others because we are afraid to be steped on or taken advantege of. we refuse to understand that some one fully understands and expects to be abused by the people they are in community?