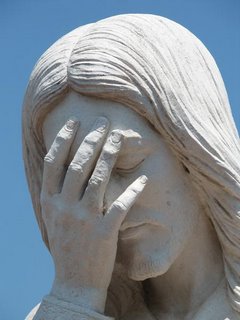 “The Son of Man must undergo great suffering…If any want to become my followers let them deny themselves and take up their cross daily and follow me.” (Luke 9.22-23)

I think too often we sacrifice the truth for attractiveness. We pull, what you might call, a “bait and switch.” We talk about all the good things we get out of following Christ; heaven, love, fellowship, salvation, acceptance. But we leave out pain, confusion, trouble, suffering, despair. See, following Jesus is more than just Jesus living in our lives, this implies that Jesus is following us. Jesus doesn’t follow us; He doesn’t just make himself a part of our lives. In following Jesus we enter His life. If we accept Jesus’ invitation to be His followers we are accepting an invitation to join with God in His life, his work, His mission. We are immersing ourselves in God’s experience.

Now many of us have this image of a God who is disconnected; He’s somewhere else and we are here. We imagine that God is a mere spectator of all the worlds’ affairs. He claps when he sees something good, and he shakes His finger when he sees something bad. Now if God is a spectator then he can distract himself from all the pain; he can look away, all along knowing it’s there but not doing anything about it, focusing on all the pretty worship songs being sung in some happy part of the world.

Jesus gives us a much different picture of God. One day Jesus was approached by Mary, as she ran to him, sobbing, she said “Lord, if you had been here, my brother would not have died.” Jesus looked around at all the people who had been following her and saw them wailing and crying. Jesus realized that Lazarus was dead. Jesus began to join himself in their weeping, to join in their sorrow. The word used to describe His emotion is embrimaomai, which means “to sigh with chagrin” or to “to have indignation on.[1]” Some translate saying “He groaned.” Jesus was filled with the same sorrow and suffered along with them. It says that “Jesus wept” (John 11:35)

Jesus’ life was not always turning tables over in temples or feeding a bunch of people or making Pharisees look stupid. Jesus wept. God, through Jesus, was fully involved in the pain of His people. God groans in agony as His people do. And so where there is pain, where there is suffering, the Church who are Jesus’ followers are there sharing in the agony. Following Christ is not a spectators’ ambition. We do not sit on the sidelines and watch the pain of the world, expecting God to come from wherever He is and intervene. We have a God who is already there. Where people suffer God suffers. God is already there and is calling His Church to follow Him. He’s calling the Church to share in the pain of the world.

There is a second part to our story of Jesus. After Jesus had seen the suffering and joined in it He asked to see where they had taken Lazarus. They took Jesus to the grave, which was a cave with a stone rolled in front of the entrance. Jesus told them to roll the stone away. One of the women who was present, probably thinking Jesus was crazy, said “it’s been a while the smell’s going to be awful in there.” But Jesus wasn’t just there to take a peek, He didn’t just want to visit. He said to her, “Didn’t I tell you that you will see God’s glory if you believe?” There was hope in what Jesus was saying. They rolled the stone away and waited for Jesus to do whatever it was that He was going to do. Jesus prayed aloud, “Dad, thank you for hearing me…” “Lazarus,” He shouted, “come out!” Lazarus came from inside the tomb bound up in all the clothes he was buried in. They unwrapped him and he was alive.

God does not only share in the sorrow but He brings life to it. Where there is pain and suffering God is there also suffering and calling His Church to follow Him. We don’t follow hopelessly but we know that the God who weeps also restores. And so we join Him in sorrow and restoration, in pain and redemption. We are never without hope. The pain is real but it is not the end. God is fully immersed in this world… as Rob Bell puts it “we live in a world drenched in God.” And wherever God is, in the places of deepest sorrow, there is hope for new life.

So we hopefully take up our crosses, knowing the trouble and pain that awaits us. We follow Jesus in sharing in the pain of the world, embracing the sorrow, and bringing life and healing. We do not sit and wait for God to come down but we go where we know God already is.

I think the Holy Spirit is speaking the same thing to you and I today Wes. On the drive in to work today I was thinking about our having the Living God inside of us. If Jesus is in our hearts and we are filled with the Holy Spirit, then we should be acting as Jesus acts. This means Jesus intercedes not only for us, but through us. He not only renews, restores, and heals us but he does those things through us. He uses us in pushing back the kingdom of darkness and bringing forth His Kingdom of light. We suffer and take up our cross because he bids us to do the same and join him both in his death and resurrection. So we weep as he wept. We also participate in his joy. It could take a lifetime to unpack this topic, huh?
Thanks for an uplifting confirmation that I was hearing correctly this morning.

inheritor,
Yes, these are the things I've been thinking alot about. We often blame God for our struggles as if he's sitting somewhere else in a comfy chair. But, what we forget, is He is struggling with us. He is in us, working through us. good thoughts.

Good post. I've just begun to read through the book of John not too long ago and I started on this story yesterday in fact. I am so glad that wrote about it becuase i was struggling with my lack of insight on it.

I cannot agree with you more that it is so important to allow ourselves to feel pain and embrace sorrow in order to fully experience our life in God. I know from personal experience that it seems easier to stuff our pain and act like it is there, but after the pile gets bigger and bigger, we not only grow numb to the pain but also to the beauty of God and his world-- we are so busy avoiding our pain that we miss life.

And I love that thought that God is right there with us, not matter how much we think we have to pull it together. A couple weeks ago, my pastor prayed this one thing that has stuck with me: "If you are in me, you are in this." Beutiful. Thanks for the post.