Heaven and the Kingdom of God: part 4 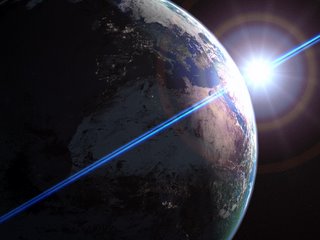 There are a lot of ideas floating around about heaven and the “end times.” I remember when I was in the second grade, attending a Lutheran elementary school, we watched a video on the end of the world. I was young and it was quite powerful so I’ve never forgotten it. It told us that God was going to rain down fire from heaven and destroy the earth like He did Sodom. It said that as God sent the flood to cleanse the earth He was going to do the same thing except this time He’d use fire and it would be the end. Partly because of this video, along with other things I’d been taught, I believed that we were living on a downhill slope toward destruction. I thought that because sin came into the world God had to give up on it and basically start over, except this time He wouldn’t make the mistake of allowing sin into the picture. I thought that my mission here was to get out. I thought salvation meant that God was going to come scoop me up and take me away to a happy land “with lots and lots of food and a big, big yard where we can play football.”[1] I had a very negative outlook in some ways but indeed a very hopeful one. I was hopeful that God was going to carry us away someday, away from all the pain and suffering we experience here. In some ways I was gloriously right but, alas, very misguided.

The Bible gives us a much different and more positive outlook but with the same kind of hope.

The Bible tells us that God created the earth and saw that it was good.[2] He poured out His creativity and created a magnificent creation, stars, the sky, the water, and His beloved Mankind. We’re given a very positive image of God’s creation from the beginning. Now later, after the creation, something bad happens. Sin enters the world. The good creation, including Mankind, is invaded by something that is not what God had originally intended. Pain becomes a part of the good reality. And from that point on, throughout the Bible, God is restoring. God continuously hears the cries of His people and answers. He’s trying to redeem everything and it all starts with a covenant.[3] This covenant is not simply that God’s going to bless everyone, and wonderfully this is true, but in this covenant God says “all the families of the earth will be bless through you.”[4] Now imagine God giving you a promise like this. This is a pretty heavy covenant, it doesn’t leave anyone out. Time and time again God comes to the rescue. God is not described to us as a God who gives up on things.

As we know from a Hebrew understanding, God’s salvation is a salvation of Man and all of His existence, his “Olam.”[5] It is an act of saving all of it, not just people. Salvation is saving everything and healing, not giving up on this world. Rob Bell said it like this:

“The Bible paints a much larger picture of salvation. It describes all of
creation being restored… Salvation is the entire universe being brought back
into harmony with its maker.”[6]


Tikkun Olam, healing our existence is what God is trying to do to, through, and all around us. When we limit God’s salvation only to people, not that that is a small concept, we endanger ourselves of over emphasizing the difference between our present reality and the one that is yet to come. As N.T. Wright puts it:


Some have so over emphasized the discontinuity between the present world and
our work in it on the other hand and the future world that God will make on the
other that they suppose God will simply throw the present world in the trash can
and leave us in a totally different sphere altogether. There is then no point in
attempting to reshape the present world by the light of Jesus Christ. Armageddon
is coming, so who cares about acid rain or third-world debt.”[7]

We can get caught in this way of thinking that God only cares about our souls and not our wellbeing. This is not the God that the Bible describes. Why would we expect any less from God? We give little thought to the subject and just go on believing that this creation is spiraling down toward destruction. Why do we limit God like this? If God is the redeemer than why is He incapable of redeeming this world? Why would God create something so good and then give up on it? God is a God who makes all things new.[8] He brings new life.[9] He brings all things together.[10]

Why, you might ask, is this so important? Why do we need to care so much about ecology and world hunger and debt? Why? If you are asking yourself this you might be, without knowing it, stuck in the mindset that we are “oiling the wheels of a machine that is soon going over a cliff.”[12] Why do you assume that this world has to be lost? Why can’t God restore it? The importance of this lies in the way we go about living every day. We can easily get caught up believing that what we do in our work today is, in the end, meaningless. We begin to see passionate people who are desperately trying to salvage the world as kind people doing nothing of real significance. The truth is, as Martin Luther King Jr. said, “no matter how small one thinks his life’s work is… it has cosmic significance…”[13] Whatever we do today, in reshaping and healing our world, will have strong continuity in eternity. Because of the resurrection of Jesus we can enter into a movement that is bigger than the Church. “We can join in a movement that is as wide and deep and big as the universe itself. Rocks and trees and birds and swamps and ecosystems. God’s desire is to restore all of it. The point is not me; it’s God.”[14] Tikkun Olam!

I have really enjoyed this series on Heaven and the Kingdom. Great stuff.

Thanks for stopping by victor, I enjoyed writing it.

I have enjoyed them as well. You are becoming a regular stop in my daily blogging. Although, I have been doing more writing than reading lately.

You have moved me to blog some thoughts on Kingdom of God. I even reference your blog in it, but I apparently do not know how to link it there. I will investigate that.

As for dualism, that is a big part of my regular disagreement with both my own heritage and many Baptists. I do not hold dualist views, in the sense that you describe them, anymore, though I grew up with them to be sure. It was a big shock to discover meaningful value in creation theologically. And I find that the issue is a major sticking point between me and those who hold some form of it.

But, as I hopefully have made plain, both in my own blog, and comments here, I seek to claim even dualists as brothers and sisters as far as that is possible. It can really be tough just at that point too.

Thanks Kevin. I enjoy reading your stuff.

Mike,
I'm excited to read what you've got. Thanks for the kind words.

May I suggest Heaven is A Place on Earth by Michael Witmer for further study? I really think you will enjoy this fantastic book on a great subject!