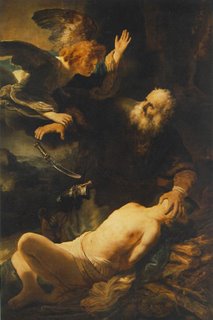 So I’m switching majors this semester. It I for a few reasons but to be honest it’s mostly just because it feels right. I WAS a Youth Ministry major and have now switched to Theology. Honestly I’ve never felt this way before, I always; since I was in the sixth grade, wanted to be a youth pastor, and I still may, but I’m not sure. For the first time ever I don’t know where God is leading me.

I’m starting to question the validity of my feelings, that I was called to youth, that I had for so long. Does God lead people to something in order to get them somewhere totally different? I think back to an old story from the book of Genesis about a man named Abraham. God made Abraham a promise that from him a nation, through whom all people would be blessed, would emerge. The problem was that Abraham didn’t have a son. How was he supposed to have a nation without even having a son? Well, in Abraham’s old age, God delivered. Abraham was given a son. Abraham thought this was the answer; this was what God wanted from him. He thought this boy was the fulfillment of the promise. Things got complicated… God asked Abraham to sacrifice his son. He ‘called’ Abraham to sacrifice his only son to God. How could he ever do this… this boy was his answer, his dream. Would he disobey God? Abraham took his son to make the sacrifice… as they built the altar and collected wood, the boy asked his father “hey, where is the sacrificial lamb?” Think about the pain Abraham must have felt… the son he loved innocently starting to suspect… how do you answer? He said to his son “God will provide the lamb.” Just after the alter was built Abraham bound up his son, raised his dagger to kill his son. Oh, the obedience of Abraham. He is doing what God called him to do. God led him to this point and so he’s doing it. As the blade fell, he was stopped. God stopped him, why? Why would God change His mind? God commended his obedience.

What’s going on in this story? Does God change His mind about where He called Abraham? What if God knew all along that He wasn’t really going to have Abraham kill his son, the son he loved? Sometimes God calls us somewhere only to get us to somewhere totally different.

I remember when I was choosing schools back in high school. At the time I subconsciously had plans to go to BIOLA. That’s where everyone who was anyone went if they were a Christian in my hometown. God gave me a passion for football. I played football in high school and did well. I wanted to play in college, I knew I could. How could I pass up such an opportunity? So, I went online and looked for Christian universities with a Youth Ministry major and a football team. I found Azusa Pacific University.

I never played football at APU… and now I’m switching majors. Maybe God had another plan in mind the whole time. If it weren’t for Youth Ministry and football I’d never have gone to APU but now I’m out of both.

I feel a little like Abraham. I’ve never been called to kill anyone but I see now that God lead me a lot like He did Abraham. He called me to Youth Ministry to get me to APU and possibly into something much greater as well. If I closed the envelope as soon as I heard from God I’d be somewhere totally different than I am now. What we can learn from Abraham is to keep the envelope open because God is still writing the letter. Be open to what god wants for you and realize He may be calling you somewhere completely different than you’d first expected. keep your envelope open or... you might end up killing someone.
Posted by wellis68 at 11/03/2005 03:03:00 PM

Wes, I think this can be something we all can look at as an inspiration. We so often see one thing that we feel God is calling us to and jump on it right away. I am not saying this is at all wrong, however I think when we don't give things a little time to work through themselves and to look deeper into things we can miss something bigger, something God might have been leading us to all along. Great post Wes. I am praying for you!

Think about this really hard. I think we can say both of those things at the same time and be correct.

Kris,
interesting thought. I think you might be on to something. sometimes life is a process ans while God has a plan for us we are not quite in that place he wants us to be, we're in the process which is right where we are supposed to be.

wow. i love your thoughts. keep that envelope open!

He uses what we give Him when we give it to Him. if it was youth and football that brought you to your current place in Him, he's a happy camper. you will always use these experiences gleaned from both journeys ... ministry is a multifaceted jewel and i know you are going to be awesome!!!!

i love reading about your journey.

Dude. I know what you mean. Kind of like how I was supposed to vault at csusm, and be a teacher... now I have no idea. After I'm through with my GE classes, I can only look to God for that major I should be going for.
Fantastic post- everyone can relate to this, because major changes in life are all but unavoidable.

Great Post!!! I can totally relate, as I think we all can in some way or another. I had a similar situation when picking colleges. I was suppose to go to Cal Lutheran in Thousand Oaks. It was the only school I applied to because that was where I was going. I even was hand delivered my acceptance letter, but then the money I was expecting to receive for scholarships I had won and from my parents Alumni money fell through and I could no longer afford to go there. So, the search began (in April) for the school I was to attend in August. God opened the doors for me to be apart of this aweome teaching program at Cal. State Fullerton and that is where I found an amazing church and high school ministry to volunteer in and where I met my husband. God is good!!!

And Kris, I totally think that both of those things can be true at the same time!!! Like Wes though, I'd love to hear more about where you're coming from with your thoughts.

Hey Wes,
Been away from my desk since Thursday.
I think your comments pretty well hit the mark of what I was saying.

I have listened to teachers that try to put all the burden of our lives on ourselves to adhere to strict disciplines of trying to find the "will of God".

I was a nervous wreck worrying about wether I was in "Gods will". This idea of "steps" or "ways" to find the will of God turned into verse 8 of the following passage:
Colossians 2:6-8
6 So then, just as you received Christ Jesus as Lord, continue to live in him,
7 rooted and built up in him, strengthened in the faith as you were taught, and overflowing with thankfulness.
8 See to it that no one takes you captive through hollow and deceptive philosophy, which depends on human tradition and the basic principles of this world rather than on Christ.

This is where I have come from. I can't say where I am going with this. All I can say is, our life here on earth is a life of faith. Just as I received Jesus the Son of God by faith, the Holy Spirit through Paul tells me to continue by that same faith of being "in Him", not by steps or traditions developed by man.

I am not saying that books written "about" God by well intentioned men are all bad. We just have to watch out and not let ourselves be taken captive by deceptive philosophy instead of simple faith that God Himself who began a good work in us will bring it to completion. All I need to do is, by the Spirit throw off the sin that so easily entangles ME, and Jesus who is the author and finisher of my faith will take care of the rest of my life where ever I am.

If I remain "in Him" by faith then "I am right where I am suppose to be".