Approaching The World: are we smaller than we think? 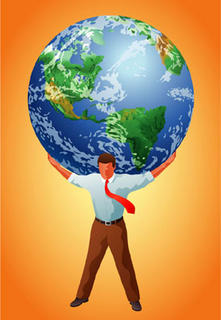 There is a big drive in many of the large churches in America to “Reach out” and preach the gospel to “the ends of the earth” this is a good thing. Rick Warren at Saddleback church rallied people together at Angel’s Stadium a few months ago and expressed his intention to battle the “giants” who are keeping people in “spiritual darkness.”

I wonder if we are not as big as we think.

We Americans often approach the world as if we have the answer and we’re going to tell others what it is. We act as if we are big, we’re the “world’s safety rope” (in the words of Audio Adrenaline). Is the best approach to go into other countries and teach them our view point and expect them to assimilate? Are we their best teachers?

I want to make it clear that the Kingdom of God, first of all, is not the “kingdom of America!” The Kingdom of God is God’s. For us to go into another country and open up a “can of theological whoop a**” is pure arrogance. We are not the holders of some ultimate truth. Everyone has access to truth. We are not taking truth; we are not taking Jesus where He doesn’t already exist. The truth is that He is there already, maybe He hasn’t been noticed, but He’s there.

Last night over dinner a friend and I were talking about how we could approach Missions in other countries. The first thing that comes to my mind when I hear “missions” is service. Maybe they’re different but I think of helping people as the best, not the only but the best, way to declare the kingdom. Service is showing it… it must be shown because words don’t cover enough space. Once it’s shown then the words make sense. If I say "God is good" to someone who has never experienced the goodness of God they will only get part of what I'm saying, they won't be able to resonate with and feel the depth of the statement. We have to ask, when words must be said, who’s the best person to communicate the words? Are we, the almighty Americans, the best fit for the task?

The Idea my friend suggested was the idea of empowerment. He suggested that it would be better for us to empower leaders in their own culture to do the teaching.

What if we would stop and think before we act?

We are smaller than we think, but we are also much bigger. American Church is not special but it’s part of a bigger body, the Church of the whole world. While we ask the hard questions about approaching the world we must first understand that we are part of it, we Americans are part of a much bigger body. There is not a simple “quick fix” answer. We may not be their best teachers… there isn’t an “us and them” it’s just us, The Church.
Posted by wellis68 at 10/18/2005 02:38:00 PM

Great post Wes. I think it is important that we remember that just because we are Americans, we are not the most important people and the most powerful people. When we think that we can conquer the world we set ourselves up for disapointment. It is important to keep perspective. The Kingdom of God does reach beyond the boundaries of America. Great post!

Wow! Jesus is already there! Did everyone else already think of that? I guess I knew it but thank you for making it so simply profound! It almost takes the pressure off. Henry Blackaby says that God is always fulfilling His plans and, if we want to be a part of them, we just need to move where He is working. We Americans tend to think that it's our idea to expand His Kingdom. Your thoughts certainly shed a different light on this mentality.
(Are your school papers this good?)

I like your perspective on things--you are a deep thinker. It was said in one of Brian McLaren's books, and I have thought of it deeply: "And could our preoccupation with individual salvation from Hell after death distract us from speaking prophetically about injustice in our world today"? I really like that song by Audio Adrenaline.

Great thought Dolores--and I "try" to go back to old Henry whenever I begin to get carried away with my own agenda. Thanks for the reminder!