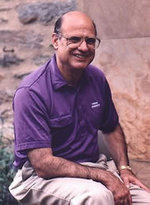 This weekend Ashley and I are at Y.S. (youth specialties) conference. Y.S. is one of the biggest (if not THE biggest) Youth Ministry source in America. Many Authors and speakers work with or for Y.S. including Duffy Robins, Steve Gerali, Tony Campolo, Mark Yaconelli, Jim Burns, Mark Matlock, Doug Fields, Rob Hensser, Michael Kast, Steven James, Tony Jones, and many more. Most of those guys are here at the Y.S. conference. We’re here to staff the YLI (Youth Leadership Institute) table. I’ll be posting probably again to summarize the whole thing.

Tonight we graced Tony Campolo with our presence at a small part of His seminar on Youth and Politics. We only stayed for a little while because there were no seats left and we were standing. Campolo started out explaining that Jesus message is about “Changing the world” now. He said while growing up he never got that message, he never heard about Jesus wanting to change the world. How wild is it that people can be in church and never hear about Jesus plan to change the world? How can that concept ever be left out of the gospel and still be the Gospel? Isn’t changing the world the essence (in the purest definition of the word) of the good news? Isn’t that why it’s good news? Tony, like me, grew up hearing that the biggest reason to be a Christian is to get out of Hell.

What makes us think that a gospel that has no plan for now could give us something when we die? If it doesn’t work now it’s not eternal!

"Thy kingdom come. Thy will be done on earth as it is in heaven"

I think tings translate a lot better when they begin in the Kingdom...

Hope you have fun at the conference and learn a lot.

Over the years I have spent much time with people who are not Americans or motivated by the “Western world - view”. These relationships often short in duration have been among the deepest and sincere that I have known. From these (and the non - western basis for my early spiritual understandings and search) relationships great gleaning and differences of understanding the life environment has been important. Beyond the confines of the Greco- Roman influence of culture and society most people understand that life here and now and whatever concept of transcendence is held to is a sacred whole and continual beyond this physical existence within “time”. The idea that eternal concepts begin outside of this life for many is understood as we would term it “atheism”. there is murmuring in the press and in leadership circles about the shift of center of Christianity to “the third world”. people living in these cultures have no separation of sacred and secular. In fact that is why many are turning to Islam as compared to Christianity because the understanding of this connection is already in the fiber of life. One of the reasons that “Westerners” are clueless as to the why’s of Islam lies here. They see Kingdom as now and future without a break therefore Shreia Law as opposed to compartmentalized constitutional law forms make sense to them. Allah -God rules here and from now continually unbroken.

Euro - thinking rooted in the Greco - Roman separation principle has even if those who live by this do not understand they do, live by we have now and after death we have eternity. To have a ticket to the better aspect to eternity is the goal of this world’s spiritual focus. This is why many people of the last couple of centuries in the dominant culture now called by social researchers “modernity” pushed a life style as Christian instead of a life understanding. A question I have posed as a result of exposure to the world and it’s thinking outside of the dominating western culture is what I am teach does it “work” make sense to my hears if they live in central Africa in a nomadic tribal setting or to the prisoner in the gulag of Siberia or the dungeons and work camps of China. Will the headhunter in New Genie relate to the words coming out of my mouth and the life lived as a result of believing without becoming a western cultural person. If not what we are passing of is culture not Gospel. Although there is structure to the Gospel that is the reason we have the writings of Moses so that a lifestyle of righteousness can be structured. However the principles of these structures are the foundation of culture justice mercy compassion provision for the disenfranchised ETC. these life issues are aspects of all cultures and the directives of Scripture transcend time and will still be the foundation of Heaven’s culture after all is that not the idea behind “ on Earth as it is in Heaven”?

Does what you think and teach as Gospel fit into any people group then that is Gospel if not… your or my culture is not Heaven’s. this is what some of these people are hearing that they did not hear growing up in the pew.
Pastor Art