The voice in the desert 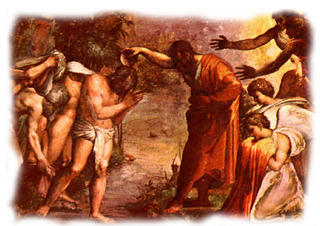 There is a man from the desert who wears camel’s hair. He’s a man of authority whose followers, like him, declare that the Kingdom of heaven is here. He is baptizing with water on the Jordan River, those who desire to return to the intention of God, the amazing life that God created for all people to live. Until this time the people knew that the world was messed up and they knew that God was going to make things right again. But how? The people are waiting for a savior to pull them away from their poverty and the oppression that subdues them. They are waiting for a messiah, and this man from the desert says he is preparing the way for Him.

At this time Rabbis are the most revered people of the land they are respected in the highest degree. A Rabbi is one who understands the Torah and teaches it. The interpretation they spread is called the “Yoke” of the Rabbi. The yoke is usually of the Rabbi who had taught them, a respected Rabbi. Every now and again a Rabbi comes who teaches new yokes that no one has heard before, this was a radical thing. So that no one will be lead astray the Rabbi teaching these new yokes must be given authority by at least two other respected rabbis. They lay hands upon him. This authority is “Shmikah.”

So, this rabbi from the desert places his hand upon Jesus drops him into the waters of the Jordan and brings him up again. A spirit like a dove comes down upon Jesus and a voice from heaven says “this is my son with whom I am well pleased.” Jesus has been given authority first by the man from the desert and now by the creator whose intention brings about healing and restoration. The intention of God placed Jesus, His son, here to bring us up from hell. He has come to do away with our poverty and the oppression that subdues us. His Yoke is easy, His burden is light and he calls us to follow Him. He calls the weary and the burdened to come to Him. His authority is from man and from God. He is the Son of Man and the Son of God. The will of God, the work God has been doing through all these centuries to restore us has come NOW in Jesus the messiah, the Christ. He is the way, the truth and the life and through nothing else will we find the life God intended for us. He has come to seek and to save that which is lost and bring it back from where it was to where it belongs. He has come to make all things new. Through Him the dwelling place of God shall be with His people and He will be their God. He changes water into wine and heals the lepers. He feeds the hungry and eats with the sinners. He is bringing heaven here and has called us to “come” and to follow Him and be His disciples spreading His Yoke. His kingdom is not of this world but is untainted by the curse. He has come not to condemn but to save.

I think it is so important that we remember the shmikah that Jesus has. So often when we get down and start wondering so many things about God, we forget the shmikah. Great thoughts!!! Keep it up!

are these thaughts of rob bell?

i searched for the word shmikah, but i could only find @ robs elvis, not in a hebrew dictionary.
help me please