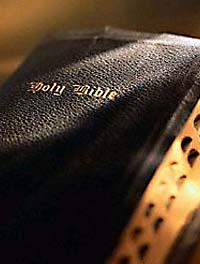 There's a great conversation going on over at demerging that I encourage you guys to join in. The conversation is on the infallability of the Bible. Here is a comment I made. What do you guys think?

It's easy to question some of the hisorical details of scripture. There are symbolic and metaphorical texts. It's poetry, conversation, history, letters, dialog... it's beautiful.

Many people think, for example, that Jesus gave the sermon on the mount over a three year period instead of all at once (see marcus J Borg, historian scholar and author.)

I find it interesting that john wrote his gospel to a specific region in which they worshipped a goddess and two gods. the names have slipped my memoery right now. They worshipped the goddess of wine whose big thing was to change water into wine, a symbol of restoration. (when they drank wine, like at a wedding party, it would constanly get watered down. This goddess kept the party going by making the water wine again.) they also served the god of healing and the god of bread. What, in Johns gospel, do we find Jesus doing in His first three miracles? Changing water into wine at a party, healing, and feeding thousands of people. Did these things actually happen or did John write this to make a point. Remember Luke told us in the beginning of his gospel that he was writing to tell us what happened and John says he's writing "so that you may believe."

The question we must ask is does something have to have actually happened for it to be true?

Can we find some kind of truth value outside the box of historical acuracy?

hmm...interesting. Does make you wonder=)

The historical foundation of “The Bible” is what sets it apart from other works of truth communication. Fables, fairy tails, and other literature forms carry “truth” within their illustrations. The Hebrew - Christian Scriptures claim not to be “a container” of truth conveying between writer and reader (in the case of oral stories speaker and hearer) concepts applicable to life’s situations but the Creator’s interaction with His creation, actual interaction.

As Maryellen and I hve said over the years whenever we have encountered those who would detract or alter in some fashion the foundational aspects of Biblical faith “if you want to believe or practice this thing then go ahead but do not call it Christian”. If one wants the benefits derived from Christ then He makes it quite clear what that means - following Him.

Both of us as former what would be considered “Pagans” today (and in my case other belief systems as well) say this with authority and experience not as a result of some uninformed fundamentalism. The historic implications lead logically to future reality. Putting it this way if the reports within the Scriptures are unfounded from the past then what future reports are unfounded???? Example: changing water to wine false, Jesus returning changing fallen world into restored world???Logic and fact gives us most probable conclusion bolstered by faith factor, truth!!
Pastor Art

Once you begin to doubt the veracity of part of the Bible, where do you stop? Either 'all Scripture is inspired by God' or not. Jesus Himself made reference to the hardest Bible 'stories' there are: Jonah and Noah. Was He lying when He said, 'As Jonah was three days in the belly of a fish'? Of course the writings are personal to the writers, but writing as God would have them write. The Bible is the inerrant, authoritative Word of God.

hey bruced, Pastor Art is really a pastor...just wanted to clairfy...
this is from his wife,
and...In second peter, peter calls the writings of Paul Scripture...
also, most of the "stories" that are in question are in the Old Testament anyway, so Bobbie, using 2 Tim.3:16 can defend the truth of Noah (almost every people group has a flood story), Jonah, Daniel, etc. And there is more evidence to prove that Jesus lived, and was crucified, than to prove that Alexander the great exisited.

Bruce,
I would appretiate it if you wouldn't be so sarcastic on my blog, please. Marryellen makes an interesting point that I appretiate. The people of Pauls time obviousely held new testament writing to a very high level and only once but, yes it was regarded as scripture. I believe the New Testament to be central to our faith which makes it scripture as far as I'm concerned.

Thank you Wes, not to be sappy that brought tears

If it is not to presumptuous Wes I think I well address the comments of Bruce here because there are many who have these questions on the one hand and on the other hand sarcasm and flippant remarks at times need answering because many come from people who have been pushed aside with indifference at one time and these sarcastic words come from wounded hearts. The screen of a blog-sight is hardly the best place however here goes.

Over the ages the Bible has been proven to be more then just a collection of baseless stories. You are correct Bruce that in the writings of the Apostles reference to “The Scriptures” meant the Tanakh the threefold aspect of Torah, Prophets, and the Writings. However the emerging understanding of the later writings from the hands of the “Witnesses” of the Creator become flesh is seen in the 2nd Tim 3:16 passage.

As the Church advanced these testaments and letters begin to be understood as Holy Spirit inspired. Back in the 3rd Century ??, Marcion’s teaching of the Heresy that the God of the “Old Testament” was not the God of “The New Testament” therefore the writings were not of the same God either was exposed. He was the originator of this dispositional concept that there was a division. This heresy went beyond giving designations and divisions to Scripture but because the Church falsely has held on to this idea a division is still there ( at the end of the controversy the Church expected that the separating designation would no longer be recognized… but- read Tertullian a church Father).

There are aspects of this false doctrine being taught today. Various dispensational views are influenced. Process and open revaluation views are rooted from this supposition leading to teaching that god who is alive and as such is giving “new“ and often contradictory “words” today. Oneness groups weather they be Pentecostals or Watchtower or Father or Jesus only groups, flow from this stream of false theology.

For those of you, Bruce included, who are adventurous spend some time reading the teachings of the Rabbis contained in the Mishnah or Talmud you will find similar commentary and direct instruction on the lips of our Savior Jesus and the pen point of the other writers. If the Bible is Holy Spirit breathed then separation and conflict within it does not exist. Separation and conflict is brought to the reading and study from the searcher not the writer. The world-view that arises from their teaching and being studied has been consistent throughout history - evidenced in the wisdom of the Hebrew sages.

Do we as followers of Yahweh: Father, Son, and Holy Spirit consider His words worthy of adoration , notice I did not say worship, yes because they are the foundation and framework of truth. Without a foundation and framework there is not a structure but just piles of material that we can form into any image we choose HMM sounds like Idol worship to me.

We have the mind of Christ revealed to us we have the heart of the Father exposed to us both of these aspects of Yahweh are inscribed in words, also on our hearts since creation, and brought to remembrance through the instruction of the Holy Spirit. Are the Scriptures of value? Yes great value they are the oracles of Yahweh!!! Without them we are blind and deaf.
Pastor Art: in good standing with Open Bible Standard Churches - in case anyone might wonder.

No prob, bro. Over and out.

wes,
are you suggesting that just because your friend has a title of "pastor", he should be placed on some kind of pedestal and given respect for it?

art,
does your title really make you so enlightened and so special that you should deserve more respect than anyone else? also, does your title make it beneth you to stick up for yourself? do you really need people who are beneth you like wes to do your dirty work?

No, I just don't find it good to call yourself "pastor" in order to mock someone else. Pastor Art is a pastor, yes it's a title, but he's a pastor so I don't mind calling him that. Why do you call somone doctor or even Mr.? It's just a title. Pastor Art refers to himself as pastor Art bruce just did it to be "funny" and sarcastic.

I am not sure why this has become such a big thing, but if you noticed I did respond to Bruce.

Does being titled lift me up upon some type of pedestal, only if you do that. All of us in the Body of Christ have vocations that we should be employing in advancing His Kingdom. We should do this faithfully within the forming of our attributes strong and week which we received while growing in our mother’s womb.

I ask, have you searched yourself finding that place that is much needed within His body? If not find it because without you I am less effective and weaker.
Actually I function within one of the other of the 5 fold offices Paul teaches about but pastor is easer to identify in our social context. Sorry, please bring me down from the pedestal, falling from up there will hurt much more.
Pastor Art