Holy Cow: a discussion on the pursuit of human holiness. 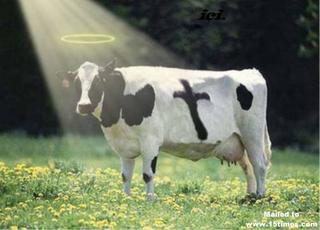 In this “emergent movement” we rarely fail to let people know that they don’t need to be perfect to be a Christian. People need not change or shape up to come to God, that’s like saying we need to get in shape before we go to the gym. In the recent generations we’ve over emphasized that people need to live holy lives.

Throughout history there have been “pendulum swings” where we reform and reshape the emphasis of Christian living. For example the “reformation” period: in the reformation You had to be part of the Church to be “saved” and the primary Authority belonged to the clergy. Martin Luther and friends came along and said “NO WAY.” They gave the authority back to God therefore creating “equality” under God and giving the “average Joe” a little “say so” about their own ideas and theologies of salvation. The Pendulum swung and dependency on the Church changed to dependency on God. In reality Scripture teaches both ideas. It says that “it’s not good for man to be alone.” We are, in fact, mysteriously dependant on each other and on God. In the reformation we left behind dependency on Church and people developed the idea that their relationship with God was “Personal.” People are more and more realizing that they need each other; look at how fast “small group” ministry is growing… It’s great. Should we, now that we see the error of our ways, leave behind the personal aspects of our faith? For God’s sake, NO!

What happens in the swinging of the pendulum is we, in our short memories and ignorance, forget all about the old ways. We abandon all value that we were taught by the former methodology.

In this emerging movement I have developed a concern, an urgent one. Now, Orthodox Christianity and fundamentalist movements have not done this but I worry that our focus has shifted too drastically on God’s acceptance of the unholy.

Its exciting news, isn’t it? We don’t have to change. “While we were yet sinners, Christ died for us.” Jesus ate with sinners. This idea has taken a front seat in emerging Christian culture. The Pendulum is now swinging. Should we abandon holiness? Should we forget God’s words; “Be holy as I am holy?”

Do we give in to temptation because God forgives us anyway? Should we ignore our sin? Should we neglect self reflection and humble self observation?

We cannot forget where we came from.

I believe that when Jesus said "I came that they may live life and life more abundantly" He meant it. Jesus came so that we could live the best possible way of life. Now, there’s a helpful method in Biblical studies called “the principal of first mention” where we refer to the first time something is mentioned in scripture. Think about abundance… where is this idea first mentioned in scripture? It’s in the Torah, specifically Genesis Chapter 1. It says God told the ground to produce and it did. The Torah describes the creation, untainted by the curse, as an abundant place. Eden is a place that produces with ease, at God’s command. The Culture that Jesus was raised and conditioned in regarded the Torah as the way toward the Olam Habah, the life God intended. Torah is, to them, the way Back to Eden, an abundant life. There’s a saying in Jewish culture that when we do good and resist temptation we are “planting the very trees of Eden,” In our language it’s bringing Heaven here. They regarded obedience to Torah as the Way to do that. In that day it was not uncommon to hear someone say that the Torah is “the Way the Truth and the Life.” Jesus said that he came to “fulfill” the Torah (Matt 5:17), to live it out. Jesus said “I am the Way the Truth and the Life; no one comes to the Father But through Me.” Jesus’ Way is the Best possible way to live. Do you believe that?

This abundant life involves incredible amounts of obedience. We understand that the obedience is not the end all but do we get that it’s a means to an end? A Follower of Christ lives a special life of discipline, humility, and obedience in order to “plant the trees of Eden.” If The Torah was the “Way the Truth and the Life” and the way to Olam Habah and Jesus said “I am the Way the Truth and the Life” and we follow Him then our end is an “abundant life.” In the life God wants for us we are perusing the healthiest lifestyle. We refuse to feed the “monkey on our shoulder” we deny ourselves. Holiness is not abandon but understood as the life that in every way is best for us. We do not need to be holy but we aim for it, that’s what the end of the race looks like.

Someone explain to me why we ignore our own sin. Why do we live in denial? We must see that we don’t have it all together and then do something about it. When we see a problem in our lives we don’t just say “hey I saw it, I have a problem” We pursue healing, we allow God to change us and solve that problem. We “face our demons.”

Where did you get all that stuff about Jews?

Mostly from N.T. Wright and Rob Bell. Some actually from Scott Mcnight I think. Some other good sources are "follow the Rabbi" (www.followtherabbi.com)Ray Vanderlaan. I also got some information from a bible commentary I used to have. It's really all over the place, you just gotta know who to aske and where to look.

OK, I have not even read the post yet because I am laughing at the picture--where did you find that? OK, I'll calm down and read the post.

Some of the stuff you wrote about the Jews is in Brian McLaren's book too: The Last Word and the Word After That (a tale of faith, doubt and a new kind of christianity) God has been showing me some great stuff.

You made a great point about holiness. We can never make it unimportant or lessen the need for it...

Another source for Jewish thought process is Dwight Pryor.

I got the picture off of Google (search: holy cow)

Great thoughts Wes! With this whole emergent church movement I feel that we have almost completly failed to remember that we are called to be holy, and yes Jesus excepts us as we are, although we wants us to live a pure and holy life. Great thoughts!

Sadly, it seems risky in emer. circles to talk this way.