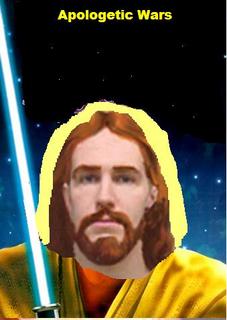 "Apologetics is a New Testament ministry of helping people overcomeintellectual obstacles that block them from coming to or growing in faith bygiving reasons for why one should believe Christianity is true and by respondingto objectives raised against it" -J.P. Moreland
J.P. makes an interesting statement:
"intellectual obstacles that block them from coming to or growing in faith." I wonder if those exsist.
I once heard a story of two guys. One was a Christian and one was a "non-christian scholar" who took pride in his ability to debunk scripture and intellectually beat the crap out of any christian on any scholastic playing field. The two guys both went to college and became roomates. Now, the Christian guy had not been a Christian for long and was still filled with questions and had no answers to any kind of theological question. Now, any outsider looking in would say the Christian was hopeless of changing the mind of the roomate, at best, and was probably soon to "lose faith." Not a year later there were two Christians living together, the "non-christian" changed his mind. when asked about the experience he said "I won every argument but no matter how badly I debunked or disproved his faith he never doubted, he had something I didn't."

Maybe the barrier is not in the intellect but in the heart. This is a faith, not an intellectual decision about the person of Jesus or the theory of evolution.If you have doubts about the virgin birth (which are far from groundless), or disbelief in seven day creation, or doubt about wheather or not Jesus actually lived, that does notexclude you from being a Christian. Maybe the questions are not a search for answers (because many times there are none and the answer given is foolish) but the barrier is burried deep benieth the questions. I commend J.P. if all his questions are answered, mine are far from it.

My intention here is not to bash J.P. Morland just question him.

I'd like to hear your input:
what's the practical purpose of appologetics (if any) in our culture? does it match J.P. Morland's thoughts?
Should we be responseble to know apologetics? (as janette asked) "is the Chruch responseble for raising appologists?
Posted by wellis68 at 8/13/2005 01:41:00 PM

This is all something that has never been on my top 100 list of things to study into, simply because it all seems so complicated and the majority of thoes that do study seem to butt heads about it. As of right now, I'm not sure if I can answer you questions. But I will do some thinking and get back to you! You put some great thoughts together on this post.

Wes, how can doubt that Jesus ever existed not exclude you from being a Christian?
If Jesus is not who He claimed to be, if the Biblical account of Jesus is not true, than being a Christian is pointless.
If He were not born of a virgin, than was he completely human? If His life and death did not fulfill the ancient prophesies then who is He? I peter 3:15: always being ready to make a defense to everyone who asks you to give an account for the hope that is in you yet with gentleness and reverence...There are some bad teachers out there, and some bad teachings...but the fear/respect/reverence of the LORD and of His Word is the beginning of wisdom and knowledge.
I think that leaders, teachers, should be appologists.

Maryellen,
Great question, I value your comments so much. I am coming with a response in Post form.

By the way, do you happen to know a Brewster Christiansen? He just graduated from Azuza this year...also a Michael Sharp or Brandy Sharp?

I'm sorry those names aren't familiar to me. i look 'em up in the year book.

i have always wondered about this same question, but i like your viewpoint here. I think it is important to know where this story of God comes from, but i think way too easily we allow ourselves to think that we have God all figured out, we like to put our faith in our pat answers and we allow our journey to be on the wide path of gaining knowledge and "victories" for ourselves and just slap the christian label on it. Ultimately, our faith is about who we are to God, what we know of his love and his faith, our reliance on him. I mean, isn't all of this really just about living in the flow God created us to live in? If we are living in the flow that God created us to live in, that should be proof enough.

I wonder even if apologetics gets it backwards. I mean, when Peter talks about our defense, it is in the context of people noticing that there is something different about our lives-- all we are called to do is explain to people why we do what we do. Too often, we just tape this fruit (thanks Robin, for that metephore) onto our lives without thinking about why we do it and apologetics are just the words that we are taught to memorize to describe that fake fruit. Personally, I just want something real... I dunno.

wes i will post on part two probly long concerning both
pastor Art keep thinking we are to KNOW HIM not guess about him she it or..

I will mix testimony together with apologies (not I’m sorries).

First if any of you have read any of my posts I do have apologetic leanings and have come to understand that “knowing “ what and more importantly why I believe has created a faith to unwaveringly trust the unknown things of Yahweh.

Does having answers mean that those who do not have answers or “inferior” answers are to be belittled? Not any more then an infant compared to an adolescent when it comes to what they understand and articulate. Can someone holding to evolution have faith in Christ for salvation? YES! But as I have written on the facts evaluated uncorrupted leads to contradictions when held up to the law of non-contradiction.

Example: creation perfect state, interrupted by some type of action that lead to imperfect corrupted condition we live in is one world- view.
Another an imperfect confused state develops from within itself into an increasing complexity leading to an undisclosed perfection producing another world view.
These two systems of origins contradict one another and like water and oil have no ability to mix. Mature evaluation will lead to… I do not have to answer and wont (already have elsewhere)

Now Christians holding to the Bible as the Creator’s account of origins fits best into which? Selah!

The issue concerning “non - Biblical “Christ’s” or as Scripture put it anti - Christ’s’ example used LDS.
Let me paint this picture of Jesus seen from my eyes prior to becoming a follower of the true Christ.

Jesus: ascended master, avatar, son of god who will be voted off the throne, an enlightened one, a Buddha for the west, medicine - man, shaman, folk tail. These were actual understandings I was taught or read about and believed and enjoyed “relationship” with. However, I keep reading Biblical texts that said different contraditionary statements about this Jesus (short story). These included that He Himself said that He was the one who created this sphere I live in. through deduction apologic truth if you will I chose to accept that the contradictions were actual and the difference in those contradictions defined the Jesus of the Bible as the difference the true one and only the Savior, my savior. He defined Himself with narrow parameters so I/ we seeking truth till provable satisfaction opens our eyes and answers questions satisfing the empty longing of the search can be found in Him.i think that is a sentance?

Did I still have questions yah, and even more today but because the defined foundations are knowable provable then I have faith that there are answers and if I can not obtain them in this life… faith that His past provable truth reveales His consistant nature and He is not a lier gives me ground/foundation to stand on as i faithfully believe what is yet to be shown me!

Isa. 55 tells us that His thoughts and ways are not ours and are higher then ours. However we must be careful to not think that what is being said is that His thoughts are unattainable! That is not what is being said we must not read that into that decoration. As we decline entirely from our perfect state as a race the gulf between our thoughts and His thoughts and ways gets larger. This is why Yahweh set down His foundational thoughts in a closed knowable system - Scripture so we can find Him in our seeking and understand Him in our maturity. In His mercy He restores His Spirit in us to bring to remembrance the truth through the mind of Christ. We can know, satisfy doubt, if we summit to His discipline and instruction and will.this is not some form of gnostisism this knowledge is not hidden exclusive but reveailed before the nations open to who so ever will accept...

Why do I believe in Yahweh when a tsunami destroys and kills when plans topple buildings and the words of a world who knows Him not because of darkness tells me you believe fairy tails or we can just feel good about a relationship seperats me from them because examination/study has shown that I am approved because I dooo have an answer to sound trite Jesus is the answer but not Just any Jesus but the Salvation of Yahweh explained understood explainable understandable and I have a real relationship with a real Jesus.
Space limits me to this wild writing. Sorry… post in future
Pastor Art

I thank you sincerely that you took the time to post such a thought provoking and inspirational comment.

I agree and see the beauty of a proper understanding of Jesus. It provides strength, faith, steadfastness...

Apologetics is truly benefitial. I'm simply interested in the relationship between intellectual knowledge and salvation.

Now, let's say I intellectually believe in things that contradict, or don't really make sence. Let's say I love Jesus and follow His teachings but I don't believe He came into history. Am I a Christian? Yes!... Now let's say Jesus really did come into history... should an appropriate study lead me to that belief, will I be closer to truth if I believe that? Yes, but I will still be a Christian (if being a Christian is in fact about faith). That's where appologetics comes in, to strengthen us. But appologetics does more harm than good if it DEMANDS, demands that we believe somehing to be a Christian that a Christian really need not believe intellectually. It might ask us to believe things in order to be closer to the truth but let's not hang salvation on it. It's a message that has kept evolutionists from being Christians for far too long. let's invite them in and all the science and history lessons will take care of themselves.

Art,
I think we might actually agree. what do you think? Thank you again for your insight.

Everyone... read Pastor Art's blog! he is obviousely an extremely intellegent man and every dissagreement we may have (though there may, actually, be fewer than you'd think)I hold with the utmost humility.
-Wes