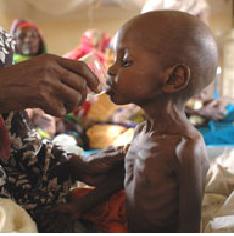 "Violence and destruction are raging in the Darfur region of western Sudan. Since February 2003, government-sponsored militias known as the Janjaweed have conducted a calculated campaign of slaughter, rape, starvation and displacement in Darfur.

It is estimated that 400,000 people have died due to violence, starvation and disease. More than 2.5 million people have been displaced from their homes and over 200,000 have fled across the border to Chad. Many now live in camps lacking adequate food, shelter, sanitation, and health care."

This picture brings tears to my eyes and pain to my heart.

To me this is equally horrifying as the millions of unborn babies who are destroyed by abortion.

It is indeed a fallen, sinful world in which we live.

It makes me so mad how Americans don't see past our countries boarders. It seems as though everyone knows about and is trying to help these teadegies all the while we sit and have no idea. Ya know??

I am becoming more and more convinced that if all the people who dare to name the name of Jesus, would live the life he put before us...if our energy was spent on the widows and ophans rather then vain contentions, the world would be much less dark. But so many rather give into fear and believe the lies of greed, comfort, and security. Two movies I saw recently, neither very godly, spoke volumes about the human plight. Hotel Rwanda and The Girl in the Cafe.

Mike DeVries whom told us about Darfur told us it is very similar to Hotel Rowanda, an excellent eye opening movie.